UN members are arguing over peacekeepers in Eastern Ukraine

Since the beginning of the year, the Ukrainian authorities resumed the discussion of the UN peacekeeping mission in the Donbass, but this week it became clear: to solve the issue in the near future will not succeed. Kyiv and Moscow hold contradictory positions about whether to engage with the self-proclaimed Donetsk and Luhansk people’s republics (DPR and LPR). Moscow calls their participation in the negotiations a prerequisite for the start of the mission. Kiev, in turn, is not going to take into account the opinion of the unrecognized republics. The situation is complicated by the fact that a number of American politicians find it necessary to exclude from the negotiations is not DND and LNR, and Russia. 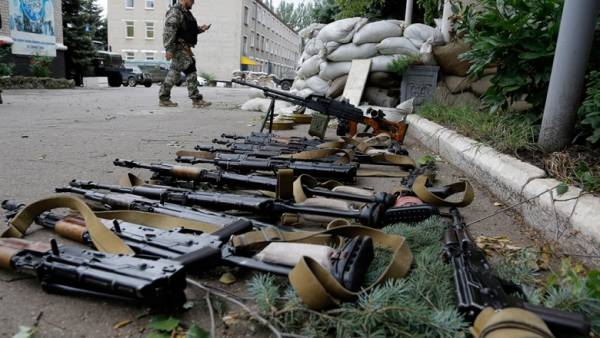 Kiev will not negotiate with the self-proclaimed DNR and LNR the UN mission in the East of Ukraine, said the evening of 19 February, the Deputy head of the presidential administration of Ukraine Konstantin Eliseev, explaining that the authorities “consider these territories are occupied”.

He stressed that the main issue of deployment of peacekeepers — the consent of Ukraine, and the opinion of “some gangs” to take into account not worth it.

The statement of mister Yeliseyev was a response to views expressed in the opinion of the Russian side on introduction of peacekeepers in Donbass. February 19, the press Secretary of the President Dmitry Peskov said that the format, structure and purpose of the placing of the UN mission in the Donbass must be agreed with the representatives of the DNI and LC. “And in this case it is not enough to only have the dialogue between Moscow and Kiev”, — he concluded. Thus Mr. Peskov confirmed that Russia’s position has not changed since the moment when in December of 2017, the country’s President Vladimir Putin stressed the need to conclude an agreement between Kiev and the unrecognized republics.

Another reason for the disagreement was the participation in the mission of the Belarusian peacekeepers. On 18 February President of Belarus Alexander Lukashenko told about his willingness to send ten thousand people in the Donbass and place them where you need it.

However, the Ukrainian side, the Belarusian initiative has not caused enthusiasm. Deputy foreign Minister of Ukraine Olena zerkal on the evening of February 19, stated that Belarus cannot participate in the peacekeeping mission because of membership in the organization of collective security Treaty (CSTO). Russia in response to the presentation by Ms. zerkal expressed the opinion that Belarus has a full right to enter peacekeepers serving with the UN mission.

“The CSTO is the collective agreement of the countries that protect the security of its borders and not aggressive direction, which brings NATO… Ukraine incorrectly interprets this language” — said the Chairman of the Duma Committee on CIS Affairs, European integration and relations with compatriots Victor Vodolatsky.

He noted that Ukraine, by contrast, “needs to support this decision, considering that (President of Ukraine.— “B”) Poroshenko has repeatedly met with Belarusian President Lukashenko and discussed the issue of peaceful resolution of this situation.”

Let’s remind, Russia in September 2017 for the first time expressed the idea of sending peacekeepers to Eastern Ukraine. Initially, the initiative was made by Vladimir Putin at a press conference on the results of the BRICS summit in the Chinese city of Xiamen. He noted that UN peacekeepers may appear in Donbass, provided that their task will be to ensure security of the OSCE monitoring mission. In the same month, Russia submitted to the UN a draft resolution on sending peacekeepers to the region.

European politicians believe the beginning of the peacekeeping mission is the first step to the gradual abolition of sanctions against Russia.

In particular, at the Munich security conference this was said by the foreign Minister of Germany, Sigmar Gabriel. However, the source “b”, representing the EU, noted that such a statement “does not fully reflect the opinion of Brussels”. So important for the EU remains the question of where will be placed the peacekeepers: only on the demarcation line of the opposing sides (as advocated by Moscow) or even on the border between Ukraine and Russia.

Immediately after the Munich conference of American politics began to Express doubt that Moscow at all costs to negotiate on the subject of the UN mission in the Donbass, reports the Wall Street Journal.

According to the publication, a number of officials in the US believe that “Washington is moving in the direction of the trap”, because in reality Russia “is not interested in resolving the conflict in Ukraine” and “the presence of the peacekeeping contingent can involuntarily lead to the consolidation of Russian control over Eastern Ukraine and not to the cessation of the conflict,” the article says.

If the member countries of the UN will not come to an agreement in the coming months to enter peacekeepers in 2018 will not succeed. “The UN on the deployment of the mission, and it is quite a large-scale mission will require 6-10 months at least. It is possible even more,” — said the Minister of foreign Affairs of Ukraine Pavlo Klimkin in the air of the Ukrainian TV channel ICTV. “It is important to happen so that Russia could not have it freeze at some point and use it to put pressure on us and on the West,” he concluded.