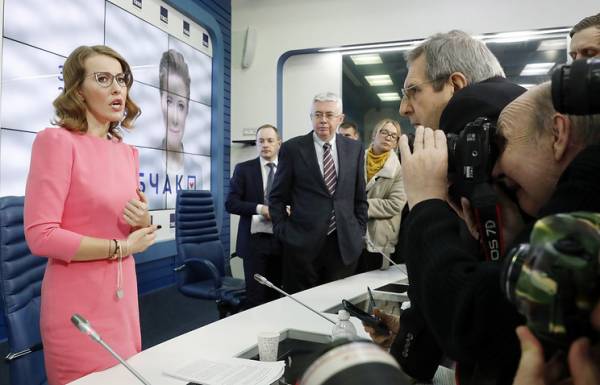 MOSCOW, February 20. /TASS/. The candidate in presidents of the Russian Federation from “Civil initiatives” Ksenia Sobchak presented the main sponsors of his campaign, which “has agreed to be named and to be open.”

“We won’t say who how much money is donated because it is a process that is still going on, donations are still going on, and a full report will be official then,” she said during a press conference in TASS.

Among the sponsors of his campaign, Sobchak called the publisher of the American magazine Inc. in Russia, Vladimir Palihata, Director of logistics transport company “Onego Shiping” Alexander Roslyakov and sponsor of “the New newspaper”, the founder of the company Yota Devices Sergey Adoniev. In addition, among the above-mentioned names: co-owner of a chain of fitness clubs of SportLife Vadim Raskovalov and his wife Jan Raskovalova, former Deputy Director of the Federal tax police service Anatoly Tsybulevsky and publisher of the Russian version of magazine Forbes Alexander Fedotov.