The Russian army may abandon cellular phones with navigation and cameras. 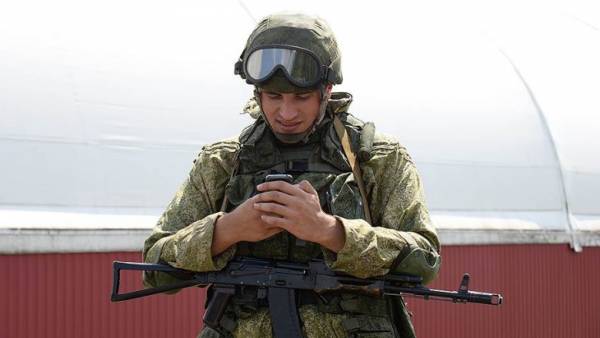 As it became known””, the defense Ministry is considering the option of limiting the exploitation of modern means of cellular communication in the Central office, management bodies and troops (up to units). Instead of smartphones to all military personnel — including the governing of the units — it is proposed to use the simplest models of push-button phones that do not have the function of a photo and video and do not track geolocation, but it can send SMS and has a built in flashlight. According to “Kommersant”, the management Agency decided therefore to deal with leaks of information, including in the media. The new measures may begin to operate as of 1 March.

About innovations in the use of personal cellular in the armed forces, “Kommersant” was told two sources close to the General staff of the armed forces, and also confirmed a source in the leadership Department. According to one of them, the question for the last months worked together with the intelligence agencies responsible for protecting state secrets. Recently, the eighth chief Directorate of the General staff of the armed forces (responsible for ensuring that information security deals with encryption), Lieutenant-General Yuri Kuznetsov compiled a list of mobile devices, “approved for use” in the Central and military authorities, the defense Ministry, connections, military units and organizations of the armed forces.

The list includes a total of 11 phone models from four different manufacturers (Nokia, TeXet, Alcatel and Samsung). This is the most simple push-button device cost from 688 (over the phone Alcatel One Touch 1020D) to 2 313. (for the “clamshell” Samsung GT-E1272). They satisfy several main requirements: use GSM 900/1800 (a number of models 900/1800/1900) equipped with a polycarbonate lid, have the function of sending an SMS, built-in alarm clock, calculator, calendar, headphone Jack, and a flashlight or even a compartment for the second SIM card.

In the recommended by the General staff of the armed forces of the phones is missing the navigation GPS/GLONASS, and there is no built – in camera or camcorder.News

American intelligence agencies banned the use of Chinese smartphones

Military sources explain the innovation, which should start to operate since March 1, “considerations of secrecy”. In recent years the Agency has experienced many problems due to information leakage: for example, during operation on the accession of Crimea to Russia in 2014, participants commemorative photo at the former facilities of the Ukrainian armed forces that were then leaked to the Internet and used in the West for allegations about “Russian aggression”. Photographs made by Russian citizens on the territory of South-Eastern Ukraine during the fighting with the regular army, served as the basis for accusations against the defense Ministry.

The last time the Department attended to the fact of publication in social networks photos taken Hamim at the airbase in Syria after mortar attack of fighters pictures are dispersed in the network were visible in serious damage to equipment that was filmed on a smartphone one of the soldiers.

In addition, according to “Kommersant”, the military expects that the waiver of smartphones will help to prevent against unauthorized ingress of documents (including with the stamp “For official use”) in the media.

Note that this restrictive fit into the ongoing defense policy with the military. So, on 13 February, the newspaper “Izvestia” with reference to the rules of Internet use developed by the Agency at the end of 2017, said that the military and civilian employees of the defense Ministry recommended to abandon the use of social networking. In the future, the defense Ministry intends to introduce amendments to laws which make them mandatory. However, in recognition of several employees of the Central apparatus of the Ministry, circumventing the rules is easy: just start an account under an assumed name.

With phones the situation is more complicated, says one of the interlocutors “Kommersant”: many Agency staff, including the leadership, are used to using multifunction devices that allow you to set messaging and to make calls via the Internet, and to abandon their accessories “nobody is going to”. But this ban just costs, said the officer of one of departments of the Ministry of defense: “to buy more simple “dialer”, which always carry with them and, if necessary, can present to the authorities. Normal phone on silent mode remains in the pocket.”