The German Institute for the study of China the name of Gerhard Mercator (MERICS) has released a report that accused Beijing of trying to “interfere in European policy” and “to split the unity of Europe.” The main “agents” of China in the European Union called Hungary, the Czech Republic and Greece, although it is noted that “lovers of Beijing” is, in Germany, in France and in other countries. As a result, China called the “greater long-term threat to Europe than Russia.” 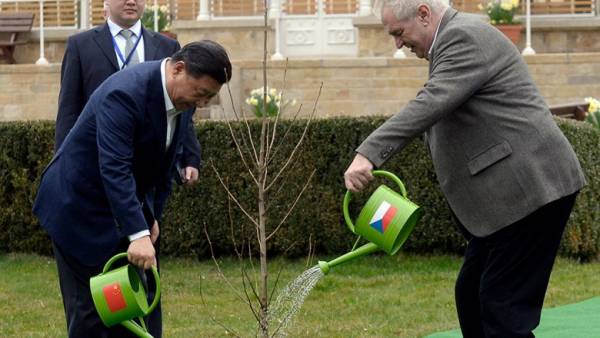 The authors constantly draw Parallels between the influence of Russia and China on the Affairs of Europe. According to them, Moscow’s strategy (it experts include “the dissemination of misinformation, interference in elections, hacker attacks, recruit supporters among politicians”) focused on achieving a rapid effect, and is based mostly on the “techniques of the cold war”. On the contrary, the Chinese influence in Europe, more lasting and consistently: Beijing ties to his country’s massive investment and the creation of networks of “friends” among European politicians, who subsequently defend a point of view from the Chinese leadership on international and domestic issues.

Unlike Russia, China has an attractive economic model and “financial resources, especially appreciate the poorer members of the EU”. Thus, summarize the report, China “is a greater long-term threat to the interests of Europe, than Russia.”

The report listed “open secret” tools of influence on Beijing policy in the EU. Among open — organization of public events with the participation of experts and politicians, a campaign to promote Beijing’s point of view on social media and the press, the holding of seminars with scientists. In parallel, Beijing is secretly trying to lure to his side of European politicians and carries out public investment to buy up key sectors of the EU economy. According to the authors of the report on hand, Beijing plays an unprecedented openness of European societies, which is opposed to the “totalitarian secrecy” of China.

While supposedly one of the objectives of China is to call in the EU, the rift between rich and poor members, in order to prevent the formation of a unified anti-China position in the community.

Beijing, according to the report, convinced in the superiority of their development model over the Western and leverage their resources in order to convince the European countries. The experts say: leaders around the world, including in Europe, begin to defend the point of view of China on the territorial disputes in the South China sea on the issue of Tibet and human rights. European policies include the rhetoric of “mutual benefit in the construction of “Belt and road”” (a Chinese infrastructure project) in their political programmes and argue for the strengthening of ties with China.

The main “accomplices” of Beijing in Europe called Greece, Czech Republic and Hungary, actively using Chinese investments. Budapest, the authors remind, in March 2017 has blocked a single European resolution condemning the torture of human rights defenders in China, and in June a similar veto was imposed to Greece.

Czech President miloš Zeman has appointed his economic adviser for the head of the Chinese company CEFC ye Jianming, and he, suggest the authors of the document, may have access to classified EU documents.

There are “associates” of China and Western Europe: among those referred to the German party “Alternative for Germany”, the former British Prime Minister Gordon brown (officially was hired by the Chinese authorities to promote the “Belt and road” at home), former Vice-Chancellor of Germany Philipp Rösler, former Prime Minister of France Jean-Pierre Raffarin (both headed by Chinese research centers in Europe).

According to the Director of the Russian Council for international Affairs Ivan Timofeev, the publication of the report marks a step in the “gradual radicalization of the discourse” against China in Europe.

“China carries out lobbying activities, trying to improve attitude, to achieve more favorable terms in business, but unless the US and the EU not do the same in other parts of the world?”— said in an interview with “Kommersant” expert.

According to Ivan Timofeev, the report is in line with investigations in Australia and New Zealand, where authorities are suspected of parliamentarians and businessmen secretly working for Beijing.

“MERICS is sponsored by a major European business, which feels threatened by Chinese economic expansion, — believes the head of the Asian program of the Moscow Carnegie center Alexander Gabuev.— I wouldn’t call the Chinese influence in Europe is essential, but it is growing, the number of passes in quality, and it causes concern on the part of the public.” Kommersant’s source in official structures of the EU said that while the impact of the number of China’s relations in the governing bodies of the Union “much inferior to Russian.” “For a long time contacts were very formal, but now the activity really China rose sharply — said the interlocutor of Kommersant.— In many respects the desire of small countries of the EU to move closer to China based on the expectation of a large investment, but usually, when Beijing voiced by the real terms of cooperation, it pulls them down to earth”.

According to the source “Kommersant”, the Chinese attempts to create in Europe a network of support for its policy of “primitive enough”. “All the Chinese experts and policy makers speak in unison and agree at once isolated. It repulses, he said.— The Chinese also overly aggressive respond to sensitive questions. For example, you can call the foreign Minister of a European country and to demand to remove a demonstration in support of human rights in front of the Chinese Embassy”.