NI spoke about the “supergun”, which helped to equip the “Armata»

The experience of creating a “supergun” 2А66 will allow Russian engineers to equip the tank “Armata” a highly effective weapon, poses a grave danger to a potential enemy, says expert on defense Charlie Gao. Column of the analyst published in the journal The National Interest. 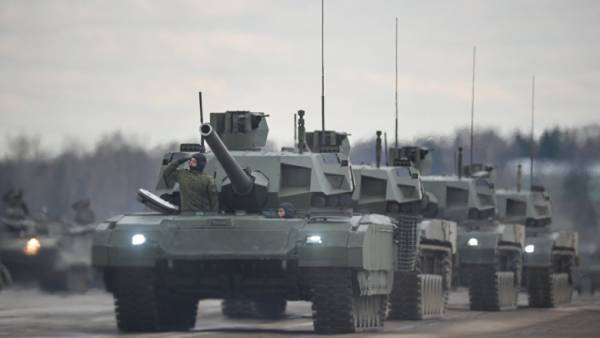 Gao recalls that 2A66 project was initiated because of fears that the firepower of Soviet tanks will not be enough to destroy a promising combat vehicles NATO. From its predecessor — 2A46 — new gun differed in the improved muzzle brake, designed for the venting, powerful piercing projectiles, increased charging chamber and the greater length of the barrel. However, before mass production is not reached. “The designers soon realized that the cost of retrofitting all the tanks gun with new ammunition will be huge. In the result, it was decided that 2А66 will become a weapon for machines of the future”, — stated in the article.

Now that “tank of the future” finally, Russian engineers strive to extract maximum benefit from developments arising out of the design 2А66, underlines the browser. So, smoothbore 2А8201М created specifically for “Armata”, does not require special ammunition and can fire any regular 125-millimeter shells. In addition, the novelty has managed to keep the dimensions of its predecessor 2A46M, thanks to which it can be installed on combat vehicles of previous generations.

“The project 2А66 dead, but thanks to him, the Russians gained valuable experience optimization 125-millimeter guns. It is possible to increase the pressure in the barrel and the projectile speed, while retaining same dimensions, concluded the Gao.

“Armata”, “Sarmatians” and “Zircons”: what are the priorities of the state armament programme until 2027