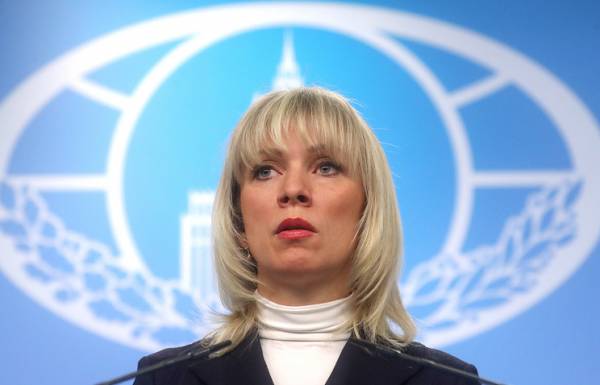 MOSCOW, January 29. /TASS./ Information about an already finished plan of the final statement of the Congress of the Syrian national dialogue in Sochi is an attempt to undermine it. This is the official representative of Russian foreign Ministry Maria Zakharova wrote on Monday on his page in Facebook.

She noted that once arrived in Sochi, the Syrians started to work, “then the media was sent a “plan of the final statement of the Congress.” “Immediately began to receive calls asking for comment, the diplomat added. – The most incredible thing is served in such a way that the arrival of representatives of Damascus and opposition is supposedly all written decisions (it is unclear, however, what and by whom), and the event is deprived of “intrigue”.

Zakharov stressed that “everything that is started in the media space a “predetermination of the outcome of the Sochi”, “pre-written statements” is an attempt to disrupt the work of Congress.”

She explained that the advance was worked out the issues of accreditation, logistics and resettlement. “But the event itself is so alive and unpredictable, that everything can be solved with wheels, as prompts meetings and consultations directly to the Syrians,” – said the official representative of the foreign Ministry.

According to her, “intrigue”, namely the negotiations on the format, participants, agenda, tickled the nerves of the Russian side until today.” “Intensive negotiations have been held [Russian foreign Minister] Sergey Lavrov with the countries of the region, the UN Secretary General (antónio Guterres), [the Russian President’s special envoy on the Middle East and Africa], Deputy Minister (foreign Affairs) Michael Bogdanov for days discussing all the nuances as with the Syrians and foreign colleagues, the special representative of the President (on the middle East), Director of the Department (foreign Ministry) MENA (Middle East and North Africa) Sergei Vershinin only in the night of Sunday returned to Moscow from Vienna, where he associated with the Syrian opposition, and immediately flew to Sochi”, said Zakharova.