The Russians honored the memory of victims of blockade of Leningrad

SAINT PETERSBURG, January 27. /TASS./ The inhabitants of the cities of Russia are going on Saturday to commemorate the victims of the siege of Leningrad. On the day of the 74th anniversary of the complete lifting of the siege on the city memorial rally pass from the Arctic to the Crimea, from North-West to Siberia. 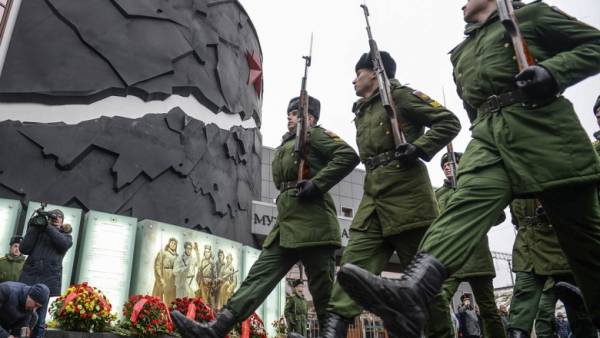 The main events are held on this day in St. Petersburg. Here in the city centre and at the plaque to the poet Olga Bergholz, whose voice has become a symbol of the struggle of Leningrad during the siege, on Saturday, launched a campaign “the Muse of the blockade.” Famous poets, actors, art dealers, and ordinary citizens read poems about the blockade, excerpts from the stories of Leningrad writers, excerpts from diaries, just talking about the siege of the city.

“People who are kept in the Leningrad Museum values, lived, fought, died. In the basement of St. Isaac’s Cathedral was stored many exhibits from local museums. In the terrible winter of 41-42 years [employees of these museums] an attempt was made working on the recovery plans of their museums. They went and described what destroyed that managed to keep the city after the bombing, they were called to lecture, these great men accomplished a feat comparable to the military,” — said during the campaign, the Director of the Museum-monument St. Isaac’s Cathedral Yuri Mudrov.

In the campaign participate specialists search teams. They tell the city residents about how to look for information about relatives killed or missing during the great Patriotic war.

More than a thousand students this year came to the village of Lembolovo near St. Petersburg to participate in the traditional Star ski trip. This year it will take place 25 times.

“The boys are three routes of different length, which together form, when viewed in plan, star. Routes 2, 5 and 10 kilometers. Before the start, the teams are given a questionnaire on the subject of blockade, and, passing distance, along the way, they answer questions about the liberation of Leningrad from the blockade,” — said TASS in the press-service of city Committee by training.

These days about the siege of Leningrad and the heroism of the soldiers who liberated her from the city, remember not only in St. Petersburg. Shares of memory were also held in Sevastopol during the great Patriotic war, survived the 250-day siege, for which in the same way as Leningrad, in 1965 one of the first cities of the USSR awarded the title hero city.