The Communist party claim that Grudinin had no securities at 7.5 billion rubles

MOSCOW, January 13. /TASS/. The head of the press service of the Communist party, state Duma Deputy Alexander Yushchenko argues that the Communist candidate in the presidential elections of the Russian Federation Pavel Grudinina were no securities in the amount of 7.5 billion rubles, and their total cost was 37 million. 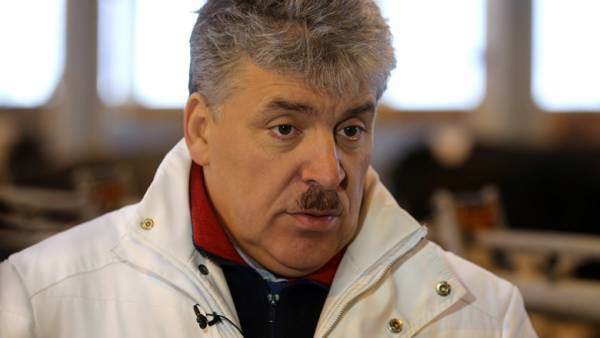 According to him, in the media “misinterpreted represented by Grudinina to the CEC information.”

“There is no 7.5 billion [rubles]. On three accounts he had about 35 million rubles, and they were turned into securities. Some media reports yesterday wrongly decided and publicized that each paper is worth 37 million, and multiplied it by the number of securities that came out of it a figure of 7.5 billion,” — said the Communist.

“He’s got 37 million invested in foreign banks in the period from January to December 2017 for the treatment of relatives. [Funds] were transferred to the securities, and all of them are equal to 37 million, and not every”, — Yushchenko said. However, he reiterated that Grudinin opened foreign accounts in January 2017, i.e. after the elections to the state Duma 2016.

As reported earlier, citing the Central election Commission received clarification of the information about incomes, property and securities, Grudinin before registering as a candidate closed the account in a foreign Bank in the amount of 14,4 million roubles and has got rid of securities.