Russian paleontologists have discovered a new species of dinosaur 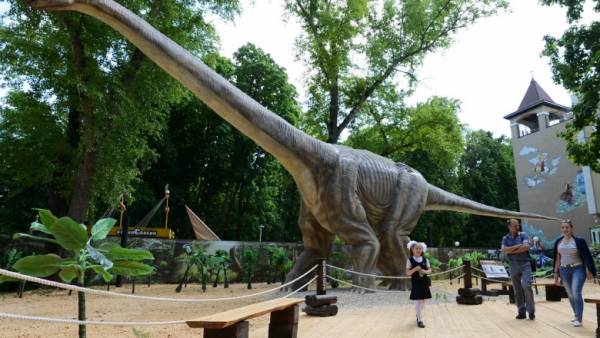 As the press service of the St. Petersburg state University, scientists have named the new Russian dinosaur Sibirtelekom (Sibirotitan astrosacralis) for its large size and particular structure of the bones.

“The animal was the second sauropod, received in Russia the scientific name, and also one of the oldest titanosaurian forms found in Asia”, — stated in the message.

To describe a new lizard scientists helped teeth, vertebrae and sacrum with a length of about half a meter, found in different years near the village of Shestakovo, Kemerovo region — one of the most famous Russian localities of dinosaurs. To get fossils, paleontologists had to literally beat them out of the solid Sandstone of the shestakovsky Yara river Kiya.

“The difficulty was that the right geological layer was placed in the middle of a steep rock, so scientists have been working with climbing equipment at a height of about four meters,” — said the press service.

Cybertitan belongs to the group of gigantic dinosaurs called sauropods. As the researchers note, he was not the greatest representative of his group: had a massive long tail and elongated neck, weighed about 10 tons and its length from head to tip of tail was approximately 12 m. Ate four-legged cybertitan plants and because of the impressive size were rarely attacked by predators.

Currently fossils are stored at the Tomsk state University.

The researchers suggest that under the multi-ton rock river Kia hid a skeleton of cybertitan because the site brings discoveries almost every year.

“However, removing it entirely from Sandstone nearly impossible, so scientists have had years to restore the unique skeleton of sauropod”, — said the press service.

According to the docent, St. Petersburg state University Pavel Skucas who participated in the study, the findings of titanosaurs, as cybertitan or tangazar, make us think about the origin of this group of ancient dinosaurs.

“It used to be that titanosaurs originated in the early Cretaceous in South America (approximately 145 million years ago). Current data suggest that they first appeared in Asia”, — the press service quoted the scientist.