The difficulties of translation. Why the founder of Baring Vostok until they started to arrest

Basmanny court of Moscow satisfied the request of the investigation about the arrest of five defendants in the case of Baring Vostok. Its founder, American Michael Calvey, arrest have not yet become — he extended the period of detention until 18 February. However, the request for his arrest will re-examine on Saturday, February 16. 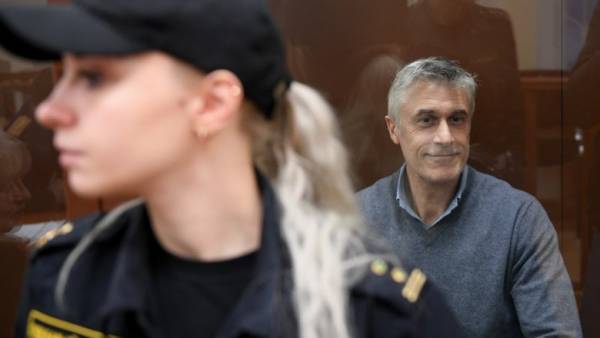 The investigation initially sought to arrest Calvey until April 13, as others. But on consideration of the petition about the arrest it became clear that the investigation has not transferred a significant volume of documents from English into Russian.

Judge Arthur Karpov during a meeting on the measure of restraint for Calvey several times in a raised voice spoke with the investigator. He was confronting him because of the papers at the court session, the investigator brought without translation into Russian. The investigator was justified, prompt action was to late at night, and so he did not have time to do the translation.

On the extension of the terms of the case asked the lawyers Calvey. They stated that they had to prepare a significant piece of evidence in his defense, but not all. Passing in the same case, five other employees Baring Vostok was arrested nearly two months — until April 13.

How were decisions made about the arrest

The first decision to arrest was issued against the Director of NAO “PKB” Maxim Vladimirov. The court then sent under arrest of Frenchman Philippe Delpal (partner Baring Vostok) and adviser to the Chairman of the Board of JSC “Norvik Bank” Alexey Konichiwa.

Lawyer Konichiwa at the meeting said that his client gave evidence to all the defendants in the case. He confirmed words of the lawyer and has declared its intention to cooperate with the investigation.

Despite this, the judge satisfied the petition of the investigation on the conclusion of a banker into custody, although Cordici and his counsel objected to the arrest.

Fourth arrested the defendant became a partner of Baring Vostok Vagan Abgaryan. As in the case of other detainees, the investigation argued the need for an arrest that he might abscond or put pressure on witnesses.

After that he was arrested the chief investment officer for an independent private equity firm Baring Vostok Capital Partners Ivan Zyuzin. His lawyer requested that he be placed under house arrest, or release on bail in the amount of $ 5 million. He Zyuzin said he believes the criminal case is a consequence of the joint-stock conflict in Bank “the East”.

Problems with the translation

The last session on the measure of restraint was Michael Calvey. To consider the request to arrest him came representatives of the American Consulate. One of them told bi-Bi-si, that is present solely as an observer. To the question about whether the U.S. side to interfere in the matter, he did not answer.

The investigator at the meeting said that before the search took place at the Moscow registration Calvey — on Lesnaya street, 9 (at this address is the business centre, which is the office of Baring Vostok Capital Partners).

“I note that accused Mr. Calvey steps do not apply to the field of entrepreneurship. Actions on behalf of the Bank and other legal entities also controlled through a chain of offshore companies to Mr. Calvey had the purpose of criminal enrichment,” the Inquisitor said (quoted by Interfax).

The founder of Baring Vostok in the first minutes of the hearing had problems with the translation. The translator couldn’t really translate his words into Russian, and ask questions in English.

In the end, Calvey had to Express their position in a mixture of English and Russian, which he spoke with a strong accent. Part of the task of translation was taken by the lawyer.

The essence of the conflict

According to investigators, the Bank “East” have given credit to First collection Bureau (PCB) in 2015, and in 2017, the Bank issued compensation. This became the reason for initiation of proceedings.

Instead of money Calvey, according to investigators, convinced the shareholder of Bank “East” on account of the debt in the amount of 2.5 billion rubles from PKB to take stock of the International Financial Technology Group, which is controlled by Calvey.

The prosecution believes that their real value amounted to 600 thousand rubles. The prosecution explained that the assessment of the auditing company PwC.

Calvey argues that the real value of these shares is higher — about 2.5−3 billion rubles. He refers to the conclusion of the independent appraiser. “If someone didn’t believe it was so worth it, let the Bank sell the shares (International Financial Technology Group). I’m sure they are. Easy to check!” said Calvey in Russian.

The founder of Baring Vostok has denied involvement in the theft. He asked the court not to arrest him and said that is not going to hide and is willing to cooperate with the investigation. His lawyer has said it is ready to pay a Deposit in the amount of 5 million rubles.

Claims to his Calvey explained the business conflict with the members of the Board of Directors of the Bank “East” Sherzod Yusupov and Artem Avetisyan.

The joint-stock conflict in “the East”

Last autumn, the Russian media reported about the conflict of shareholders of Bank “East”. The two largest shareholder of the Bank — funds Baring Vostok and Artem Avetisyan — fight for a controlling stake, wrote “Kommersant”.

Now the Cypriot company “Evizon holdings limited” 52,48% in the Bank. Behind this company Baring Vostok. Artem Avetisyan belongs of 32.55% of the Bank through “Vinvin holdings”.

The Bank is trying from the beginning of last year to attract 5 billion rubles through an additional issue of shares. “Kommersant” wrote that Avetisyan cannot redeem these shares, as he allegedly lacks funds. But he has an option whereby he can buy 10% stake in the Bank. And Baring the money is there, but he doesn’t want to increase investments in the Bank, wrote the newspaper. Plus the redemption of the additional issue funds Baring Vostok can dilute the share Avetisyan.

According to Calvey, now in the London arbitration court, go to trial on a number of deals Avetisyan.

According to him, the current case in a Moscow court can be used as a lever of pressure on them in London.

Calvey also spoke about the requirement of the Central Bank to capitalize the Bank at 5 billion roubles. According to Calvey, Avetisyan was not for money, and Baring agreed to independently capitalize the Bank. Calvey knitted Yusupov statement to the FSB that he is afraid that as a result of this transaction, the share Avetisyan in the Bank’s equity will be diluted.

On Friday, the court never made a decision about the arrest of Michael Calvey. The period of his detention at the request of the defence was extended for 72 hours.