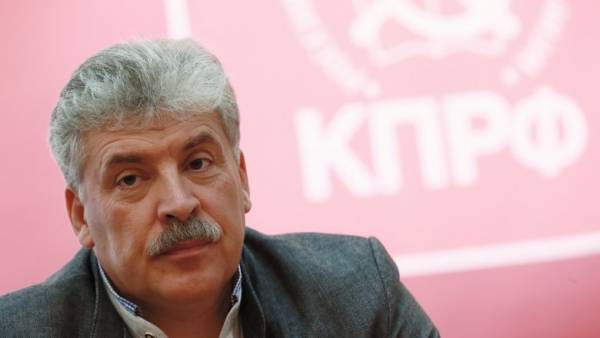 KRASNOGORSK, 14 February 2019, 18:26 — REGNUM, the Council of deputies of Moscow city Eminent by a majority of votes was removed from the post of Chairman of the Board of deputies of the settlement of Pavel Grudininand, according to broadcaster 360.

The decision was backed by the votes of the representatives of all parties, including the Communist party. Therefore, the associates expressed their dissatisfaction with the fact that Pavel Grudinin constantly discreditied party your financial and personal scandals.

We will remind, Pavel Grudinin became a member of the Council of deputies of city Vidnoye Leninsky district, Moscow region, September 10, 2017. Already on 29 September, with the support of the Communist party he was elected Chairman of the Board of deputies. However, occupying this post, Pavel Grudinin, little attention has been paid to the welfare of the inhabitants Visible.

Moreover, when it was curtailed social articles of the budget.

In particular, the program “Sports city settlement Vidnoye Leninsky municipal district for the years 2017-2021” funding was reduced by 13.5%. The program “Social protection of the population of the city settlement Vidnoe Leninsky municipal district for the years 2017-2021” — 1.9%. The funds provided to offset the cost of payment for housing and utilities the participants of the great Patriotic war, were also reduced by 37.5%.

The reduction of social articles of the budget, the refusal of deputies from the financial support of needy categories of the population with the General increase of a profitable part of city Treasury clearly contradicted the ideas with which Paul Grudinin, with the support of the Communist party was the presidential election in March 2018.