Love to the grave

Valentine’s Day is accepted to speak about the absolute sense, the end of which was capable of only death. Archaeologists also know something about it. From time to time in the ancient tombs, they encountered a pair of burial: two skeletons lay, touching, embracing or holding hands — well, how here not to remember the vows of eternal love. Just want to know the age of “lovers”, the details of their life, the cause of death. But what really thinks about these pairs is science? 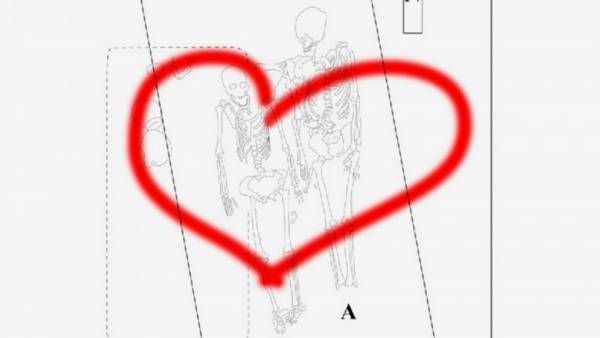 Read more about it in the blog dedicated to the feast of Saint Valentine, says Ulli uletova, author of Pompeii: the step-by-step.

A young couple from Rakhigarhi

In 2013, a joint expedition of the Indian archaeologists of the Deccan College and anthropologists from the South Korean Institute of criminology at the faculty of medicine of Seoul University began work on the study of the necropolis Rakhigarhi — the largest settlement of India (or, as it is also called Harappan) civilization. Despite the fact that Mohenjo-Daro and Harappa more known to the General public, Rakhigarhi exceeded them in size and age.

of a Mysterious skeleton found in an Egyptian pyramid

The settlement, now known under the modern name of Rakhigarhi, took nine hills, in the scientific literature have received designation RGR from 1 to 9. Two hills — RGR RGR 4 and 5 — not available for the excavation, they located the village. The other hills are the subject of interest of researchers of the Indus valley civilization. On the outskirts of the ancient town of Rakhigarhi the cemetery was located. Joint Indian-South Korean expedition led excavations on the hill RGR 7. Only RGR 7.2 and 7.3 were identified 62 burial, radiocarbon Dating attributed to the second half of the III Millennium BC, that is, to a Mature phase of development of Indian civilization.

Grave BR 11 (RGR 7.3/B4/BR11), which will be discussed below, was constructed over the earlier 12 BR and contained combines a simple primary burial of two people — in reports and publications they appear numbered 11A and 11 B. the Skeletons lying in the pit depth of two feet and dimensions of 2.5 by 1.5 meters in extended position on the back, stacked along the body with hands, heads North. They are well preserved, except for the bones stop 11A. The head 11A was converted to the 11th Century grave goods consisted of red ceramic vessels, inherent in the Harappan civilization, near the right collarbone 11B were found striped agate bead.

The information of field studies published in 2016, dried up, and we had to wait two years until the completion of the laboratory study of skeletons to find out who they were. Expectations were met with interest.

11A turned out to be a man 172-175 centimeters, and 11A — female growth 160-163 cm. Both at the time of death were young, by today’s standards, people from 21 to 35 years. No injuries, no signs of medical intervention, no signs of healing or pathological damage their bones have not. Only men showed dental pathology, linear enamel hypoplasia and dental calculus, possibly due to his specific professional activity or some dietary habits.

Since there is no clear archaeological evidence that burial has taken place at different times, apparently, we must assume that these two people died of unknown (at least not now determinable) causes at one time. So, this is the only known grave of civilization the Indus valley, which contains opposite-sex joint burial. Unfortunately, it remains a mystery what exactly ties were associated divided into two one grave residents of the ancient settlement.

Archaeologists have uncovered the secret underground passage in the Vyborg castle

However, of particular interest in the scientific world aroused not so much a hypothetical relationship of this pair, how many announced and genetic analysis of four skeletons from the cemetery Rakhigarhi, all of which turned out to select only one suitable for the DNA test sample. In April 2018, the head of the Laboratory of ancient DNA at the Institute of palaniuk behalf of Borbala Sahni in Lucknow niraj Rai (Niraj Rai) made a comment about the impending publication of research cherepantsev from Rakhigarhi.

The main conclusion, which he announced in samples obtained from the specified necropolis, there are no markers, so-called steppe DNA — Y-chromosome haplogroup R1a. This means that at that time no mixing between the populations of the Indus valley civilization and steppe pastoralists (arias) was not.

Of course, the results of the study of one sample from the Eastern end of Indian civilization cannot give rise to a complete revision of the theory of the invasion of the bearers of R1a in the Indus valley. However, this additional data in the global scientific debate about the migration patterns of Indo-Europeans.Plague skeletons from the Samara region

The famous couple skeletons often flashed in the news in 2018. She was found in 2015 in one of the mounds of the burial of Michael II in the Samara region relating to the period late bronze age (about 3800 years ago).

In the Russian Arctic found the first medieval mummies

The burial ground consisted of seven mounds. In 2015, archaeologists have conducted security and rescue excavations of three of them — 2, 3 and 7, which were buried three men, 2 women and 15 children. How figured out the experts, the three men, most likely, consisted in relationship. One of them, 25-40 years, were quite high — 172-176 cm, while his skeleton showed a number of pathological changes were a result of infectious polyarthrosis of nature, according to the researchers, “rarely observed in populations of the bronze age”. The other man was quite young, 18-25.

The skeletons of people from the burial ground of the Mikhailovsky II contain the same strain of plague bacteria Yersinia pestis, possessed a mechanism of transmission via fleas infection rodents, humans and other mammals.

According to the study, the strain discovered on the remains in the Samara region, is the ancestor of the strains that caused the worst pandemic of plague, occurring in bubonic form in the civilized world — Justiniano plague of the VI century (the first historically recorded), the Black death of the XIV century the Third pandemic of the XIX — early XX century.

Alas, neither in one nor in other case we do not know the love story of the ancient people. And if she was? Perhaps these graves were buried the relatives of the dead at one time, and the romantic posture of the backbone is simply a result of the displacement of skeletons for millennia.