The Minsk agreements do Washington

Kiev is promoting an alternative plan for Donbass. 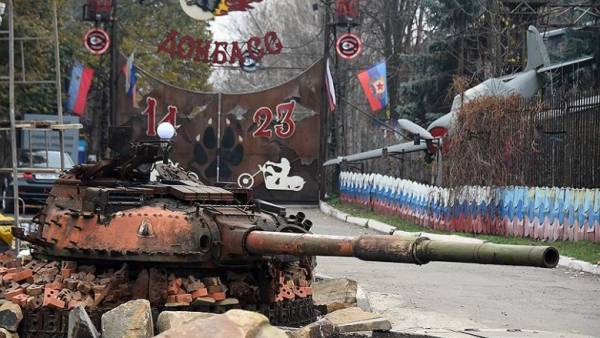 Kiev is promoting an alternative strategy for settlement in the Donbass, which should be a plan for a peaceful return of uncontrolled areas in the re-election of Petro Poroshenko in the presidential elections on March 31. The program of “de-occupation and reintegration” of the Donbass, called “the Mechanism of small steps”, presented during his visit to the US, the head of the MIA of Ukraine Arsen Avakov. It offers introduction to the region, UN peacekeepers and the creation of “demilitarized zones of security” which will be held local elections under the Ukrainian legislation. Developed as an alternative to the Minsk agreements, “the Mechanism of small steps” to exclude the South-East the possibility of federalization and autonomy.

The ongoing working visit of Arsen Avakov in Washington for the second time in less than a year — comes amid held on Tuesday in new York, the UN security Council meeting on Ukraine, timed to coincide with the fourth anniversary of the signing of the Minsk agreements — the “road map” for the settlement in the Donbass (the”Minsk-2″).

Discussion in new York confirmed that the implementation of the peace plan agreed upon by the leaders of Germany, France, Russia and Ukraine is at an impasse.

Following the meeting, Deputy U.S. permanent representative to the UN Jonathan Cohen said: “Our sanctions on Donbas will be in effect until until Russia complied with Minsk agreements”. Thus, he placed on the Moscow all responsibility for the lack of progress in the settlement in the Donbass.

On the same day when American diplomats in new York have once again brought Russia account for the failure of the Minsk agreements, Arsen Avakov in Washington presented American politicians, diplomats and experts have developed a Kiev peace plan for the return of Donbass.

The strategy should become an alternative to idle with the Minsk agreements Mr Avakov with their American interlocutors prefer not to discuss, focusing on the presentation of the “de-occupation and reintegration of Donbass”.

However, a fundamentally new moment has become only a presentation of “the mechanism of small steps” in the United States. In Kiev, Arsen Avakov publicly said about it back in June 2018 at the IX National expert forum. All this time described in detail the plan was available on the personal website of the Minister, but emerged first, interest in it waned — even the foreign Minister of Ukraine Pavlo Klimkin gave to understand that without the will of Moscow “the Mechanism of small steps” will not work. However, Mr Avakov did not stop.

“The U.S. Institute of peace held a round table with the participation of authoritative experts, representatives of Congress and the state Department, and international organizations. Frankly discussed the opportunities, risks to plan the de-occupation of Donbass. The beginning of international dialogue — a crucial step towards the implementation of our plan,” — said in Twitter Arsen Avakov at the end of the meeting, which was also attended by the Ambassador of Ukraine to the United States Valeriy Chaly.