In Colombia, disappeared second-largest river. As it happened

Cauca, the second largest river in Colombia has dried for a few weeks. The problems began with the construction of the dam. 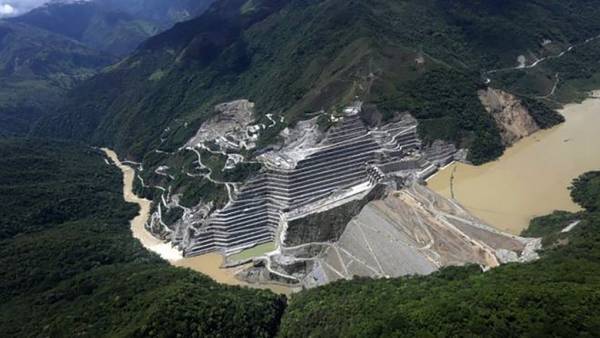 This river with the length of 1350 km originates in the Andes and flows into the canal LOBA Magdalena river. The river valley is home to approximately 10 million people, about a quarter of the Colombian population.

On the river there are several hydropower plants on its banks built mining complexes, factories, cities and villages. Its waters were used by the farmers here was developed for fishing. In may 2018 heavy rains led to flooding of the surrounding areas, thousands of people were evacuated.

Now the river had virtually disappeared. The water level in it is so low that to make the necessary measurements impossible, experts say.

The river disappeared in just a few weeks — from December 2018 to February 2019.

What happened to the river Cauca?

On the river built a dam named Ituango named one of the neighboring towns. Hydroelectric power station there is still under development.

The construction company is engaged in EPM. Its engineers in the design of the dam has provided three spillway tunnel.

In the picture from March 26, 2018 (bottom) of company Planet Labs you can see the scale of construction. In the upper part of the picture there is the dam itself.

The direction of flow of the river in this picture — from the bottom up. When the water flow reaches the dam, the water passes through the three spillway tunnels.

Later, two tunnels will be closed, would remain open only one.

In the picture April 8, 2018 evident that before the dam is already formed, as calculated by designers, a small artificial reservoir (lower portion of photo).

But in early may began to appear problem. The next picture (below) was taken a month later, on 7 may.

It shows the appearance of the sinkhole, which appeared near the only open spillway tunnel.