VLADIMIR, February 12. /TASS/. The management of UMVD across Vladimir region was removed by police from the escort car of the Governor of Vladimir Sipyagin after caught on video of the incident with dangerous behavior on the road and boorish attitude to other road users, according to the website of Ministry of internal Affairs.

On the Internet record it is visible as a patrol car accompanying the Governor on a working trip to Vyazniki-honking, brakes sharply in front of other cars on the track wagging. After that, the driver of the police crew was allowed insults at passing next to the driver. 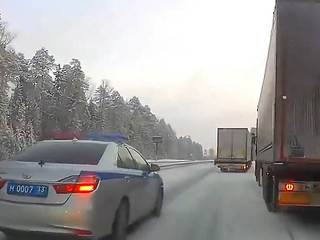 , a Controversial convoy of the Governor: the traffic police have threatened punishment

“In fact published on 11 February a number of online resources videos featuring police chief UMVD of Russia across Vladimir region the General-the major of police V. P. Kukushkin appointed to conduct an internal review to establish all the circumstances of the incident. Currently, the crew of traffic police of the escorting suspended from performance of the duties”, — is spoken in the message.

It will also test the version about the possible pressure on the police from passengers accompanied car. With the staff of road patrol service of the region conducted additional briefings dedicated to the rigorous implementation of requirements for escort vehicles patrol cars. “If by results of check of actions of employees will be identified violations, all the guilty will be applied disciplinary measures”, — stated in the message.