In Russia have become less likely to marry. 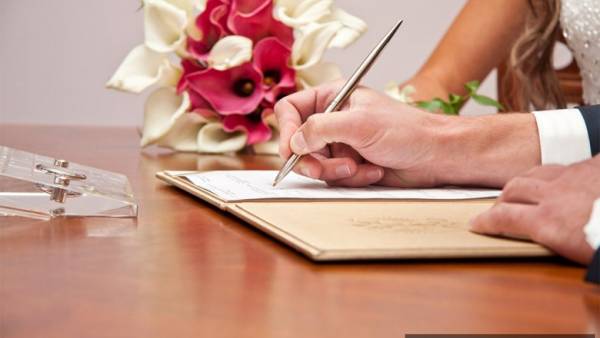 According to Rosstat, in January-November 2018 was signed only 867,1 thousand unions. If you take in account the last five years, it appears that the number of marriages fell by almost 30%. Experts say that the reluctance of Russians to register their relationships caused by poverty. Real incomes are declining for five consecutive years. This reduces not only the statistics of marriages, and the birth rate falls.

In Russia reduced the number of marriages. In 2008, there are 1 million 179 thousand new households in January-November 2018 — only 867,1 thousands of marriages. This is evidenced by the data of Rosstat, which is at the disposal “Газеты.Ru”.

If you look at the statistics from January to November 2018, the results for 2008 drop is 26.4%. Unaccounted December 2018 the situation does not improve much.

However, in 2018, there’s every chance that the number of marriages will exceed 1 million

While Rosstat is no complete statistics for the year 2018. Summary statistics appear only at the beginning of July.

To divorce the Russians often did not. On the contrary, the data of Rosstat, in January-November 2018 indicate a decrease in the number of new divorces by 25.8% in comparison with 2008 and by 24.8% over the last five years.

At the end of 2008, there were peak — 703 thousands of divorces, and in November of last year 521,6 thousands of cases. Further, during the period the total number of divorces remained at the level of less than 700 thousand, while closer to the mark of 600 thousand.

Experts interviewed “Газетой.Ru” I believe that the reluctance of the Russians to create a family for several reasons.

The first and most important — economic situation in the country.

Sanctions against Russia began to introduce from 2014, the ensuing economic downturn and the depreciation of the ruble affected the standard of living in the country.

“We see how complicated the economic situation, in particular related to the welfare of the people, with the formation of their incomes. First of all, real incomes. It is sometimes said that we have rising wages, but then it turns out that we are talking about nominal wages, which in contrast to the real wages are rising. The lack of visible and projected future causes people to postpone their plans for marriage,” shared Professor of the Department of labour and social policy of the Institute of state service and management of the Ranepa Alexander Shcherbakov.