The cost-effectiveness and project timelines can be compromised. 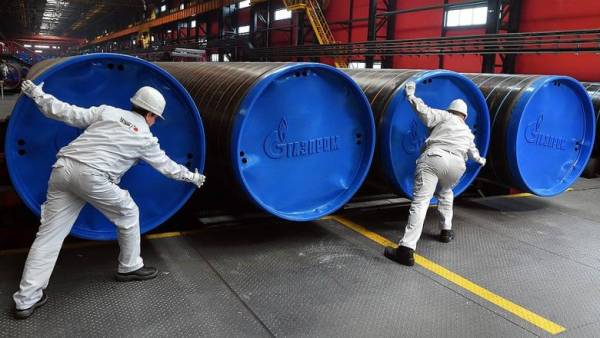 Construction of the pipeline “Nord stream-2” may be the subject of open conflict between the most powerful EU countries — France and Germany. Paris, still on the side of Berlin, suddenly made clear that they would support amendments to the gas Directive of the EU. Their adoption will not stop the project, but may slow it down, and call into question the return on investment. In the worst case, Gazprom will be able to use only half the capacity of the pipeline that would give Ukraine an advantage in the upcoming negotiations on the transit of Russian gas in 2020.

Permanent representatives of EU countries will discuss on 8 February in Brussels the change in the gas Directive, which aims against the project “Nord stream-2”. Intrigue in the meeting made the unexpected statement of the French foreign Ministry on 7 February that Paris “is going to support” the adoption of the amendments contrary to the earlier position of the country. The source of this possibility on the same day wrote to the German Suddeutsche Zeitung. The representative of the French foreign Ministry stressed that the negotiations on the amendments of Germany, the main supporter of the “Nord stream-2” in the EU, will continue.

The German media were quick to heated conflict with reports that the President of France Emmanuel macron refused visit at the Munich security conference in mid-February. However, their sources claim that this decision was taken earlier, and according to the French newspaper Le Figaro, the French President has cancelled all foreign visits to mid-March in connection with the situation in the country (there with November continue performances of “yellow jackets”). The opportunity to discuss any misunderstandings the leaders of France and Germany was two weeks ago in Aachen, where Emmanuel macron and German Chancellor Angela Merkel signed the new agreement on cooperation between the two countries in addition to agreements of 1963.

In the French press commented on the news with restraint. So, the leading economic newspaper Les Echos notes that changing the “tone” of the speeches of Paris can be due to the differences between the foreign Ministry and the Ministry of economy and Finance of France, as well as threats imposed on gas pipeline sanctions of the United States. The position of Washington in relation to the project is really becoming more stringent: February 7, U.S. permanent representative to the EU, Gordon Sandland, ambassadors in Denmark of Charles Sands and in Germany Richard Grenell wrote an article for Deutsche Welle, in which he emphasized that the construction of the pipeline will increase the susceptibility of Europe to the “Russian tactics of energy blackmail”.

The amendments in question should extend the rules of the Third energy package of the EU on the offshore gas pipelines from third countries. Although they were prepared in 2017, the adoption was delayed because the presiding in the EU in 2018, Bulgaria and Austria put the document under the carpet.

So far, Germany has successfully blocked the start of the Trialogue, relying in particular on a negative opinion of lawyers of the EU Council at the previous edition of the amendments. But if France joined the supporters of the amendments, Germany together with its allies on that issue by Austria, Belgium, the Netherlands, Greece and Cyprus will not be able to block them from further consideration.

Save the situation could a neutral Italy’s position, sources say “b”, but in General they are pessimistic.

This vote — the moment of truth for opponents of the “Nord stream-2”. In may elections to the European Parliament, and then will begin the process of changing the composition of the Commission — if not start the process of approval of the amendments until mid-February, the chance to take them this year are vanishingly small. At the end of 2019 at least the first thread “Northern stream-2” should be laid, which will put him in the category of existing projects for them in the amendments provides for a softer regulatory regime. Kommersant’s sources in Brussels say that even if the proponents of the pipeline will lose 8 February, they will try to tighten further harmonization. So, Germany can request a new legal examination by Romania to accelerate the process decided at this stage not to.

If the process of adoption of the amendments will be launched, this may impact on the position of Denmark, which remains the only country yet not given “to Gazprom” the permission to lay pipe in its exclusive economic zone in the Baltic sea. Formally to deny the permit for Denmark can not, but concrete terms of its granting is not. If “Gazprom” will not receive permission until mid-year, it will affect the timing of completion of the project.

If the amendments are adopted in current form, says Maria Belova from Vygon Consulting, Gazprom will have to abandon the functions of the operator of the pipeline and transfer it to an independent company. Also monopoly will be forced to abandon 50% of the capacity of the pipeline. Anyone else to export pipeline gas from Russia, “Nord stream-2” the result can be loaded only half (as it happened with the “Nord stream-1”, the restrictions were lifted only in 2017). Then the payback would be under question, as the return of €4.5 billion, which will invest in German gas pipeline Uniper, Wintershall, Austria’s OMV alongside the Anglo-Dutch Shell and French Engie.

Even the power limit at 50% will be “Gazprom” catastrophe, says MS Belova, because he will be able to apply for exception on the first “Nord stream”.

But, she adds, it is the inevitable preservation of the transit through Ukraine and will strengthen the negotiating position of Kiev this summer.