For the murder of a marine in Syria will pay all

He sought compensation for the victim’s parents, and the state will retain part of its income. 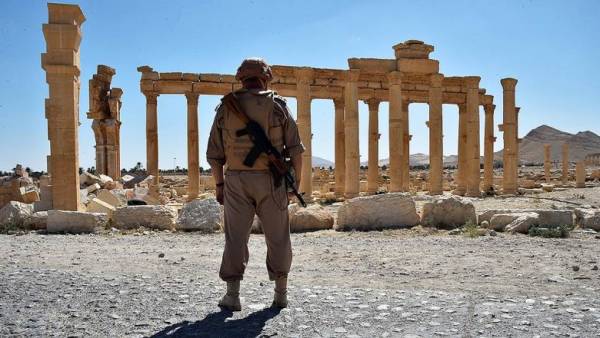 As it became known””, the scandalous criminal case about the murder of a Junior Sergeant of the marine corps his subordinate at the Russian military base Hamim in Syria. For a crime committed in the heat of passion, the perpetrator, more than a year in detention during the investigation and the military court, received 22 months of restrictions. Thus, the civil court ordered him to pay the parents of the victim on 300 thousand RUB, to challenge the convict did not.

Kirovskiy district court of Astrakhan on 24 January this year granted the petition Nuraly and Rahila Abutaliev to the younger Sergeant of contract service of the marine corps Ruslan Ilyasov compensation for moral damage caused in connection with the death of her only son — the sailor-the contract employee of Diamond Abutaliev. Indicating that the loss of the Diamond caused them extreme emotional suffering which affects their own physical and mental health, the Lord Abutaliev demanded to collect with condemned Ilyasova 1 million rubles in their favor. Counsel for the Respondent Denis Tukaev explained to the court that his principal agree to pay compensation, however, the stated requirements are called disproportionate reasonableness and behavior of the victim. He was asked to take into account material and marital status of the Respondent, being the father of two minor children and husband and non-working spouses, as well as the fact that the plaintiffs had previously refused any help to the defendant. The last court ultimately ordered to pay masters by Abutalebi 300 thousand rubles. “My principal has deemed this amount reasonable and the court decision to appeal will not be” — has noted in conversation with “Kommersant” Mr. Tukaev.

Emergency that occurred at the Russian military base in Syria Hamim March 18, 2017, the lawyer Tukaev called “office and household”.News

From criminal case materials follows that at 8:30 in the morning sailor Abutaliev, unhappy that Sergeant Ilyasov made a remark to him “about putting in order the territory”, obscenely expressed in the address of his commander, and then struck him several blows with his fist in the face. Then the fallen Sergeant and the sailor was stabbed twice in the head with a foot. As a result, as established by the then experts, Sergeant Ilyasov received a closed head injury with concussion, bleeding in the soft tissues of the left parietal region and other damages classified as light injury. Shortly thereafter, Sergeant Adam, in a state of “affective explosion in connection with an acute period of craniocerebral injury as a result of application to it of violence”, ran out of the dormitory, where there was a fight, heading to the dining room. He grabbed lying on the table a kitchen knife, caught the offender and, “wanting revenge”, the victim inflicted five wounds in the left side of the chest and shoulder. The victim was taken to the infirmary, but an hour and a half, he died — one of the stab wounds proved fatal.

It should be noted that the incident occurred in front of a dozen Marines who saw the fight between the soldiers, and then attack with a knife.

The murderer surrendered immediately to the command. He, however, claimed that as a result of the blows to the head didn’t remember and realize what he was doing. After allegedly beating ordinary found in his hand a knife, and beside bleeding the offender, who tried to give first aid.

A criminal case against Ruslan Ilyasov military investigator of the Investigative Committee of the Russian Federation initiated under part 1 of article 107 (murder committed in a condition of suddenly arisen strong emotional excitement (affect) caused by violence, mockery, or grave insult by the victim) and item “a”, “b” part 3 article 286 CC RF (excess of powers of office with application of violence that led to grave consequences). Guilt Ruslan Ilyasov fully recognized, however, testify during the preliminary and judicial investigation refused, referring on 51-Ju the Constitution article, allowing not to testify against himself. Stated that proves their explanations about the incident described in the Protocol of the surrender, furnished on the same day — March 18, 2017.

However, the investigator of the military investigation Department of the TFR in the Caspian flotilla (there were participants of incident) 4 December 2017 issued the resolution on refusal in excitation of criminal case under part 1 of article 334 of the criminal code (violent actions against a superior in the discharge of duties of military service by inflicting beatings), in respect of the seaman in connection with the death of the latter. In Syria, the sailor served a little more than a month — a trip he was sent on 13 February.

Military registration and enlistment offices do not put hot spots

The case of Ruslan Ilyasov considered the Astrakhan garrison military court. In the course of the trial it was established that the Sergeant have struck a knife to the victim “not be falsely understood interests of service, wanting to show their supposed superiority, and revenge for the insult and violence applied to him by the” Diamond Abutaliev. As a result, the charge under article 286 of the criminal code, threatening a ten-year period, was charged “as excessively imputed”. In sentencing the court took into account the confession of the defendant, the presence of his minor children, and that he was awarded medals of the Ministry of defense “For the return of the Crimea” and “Participant in a military operation in Syria.” Awards and status of participant of hostilities he was not deprived. Passing sentence, the judge emphasized that because the defendant is a soldier, he cannot be sentenced to imprisonment and forced labor, giving the Sergeant a restriction on military service for one year and ten months, during which his monetary allowance will hold 20% of state income. In the corresponding article 51 of the criminal code States that during the restriction, the convict may not be promoted in rank, military rank, and punishment term is not counted in his years of service.

On the basis of the verdict of Ruslan Ilyasov, who during the investigation and trial was in custody, was released on his own recognizance and appropriate behavior.

The verdict of the North Caucasus district military court appealed only the victims, demanded to make the Sergeant more severe punishment.

They, in particular, believed that the affective state during the murder has not been proven, and in addition, it is not considered that earlier, during military service Ruslan Ilyasov was convicted for hazing (part 1 of article 335 of the criminal code). By the way, about the circumstances of the death of my son, they found out at his funeral from former colleagues.

However, the court of appeal, in coming to the conclusion that you do not have any evidence of the study of the court of first instance of inadmissible evidence or the erroneous exclusion from trial of evidence admissible, left the sentence in force.

Note that this state of emergency is one of the few that have occurred among troops fighting in Syria. As noted by a senior source “b”, the vast majority of them are honestly performing their military service duty.