MOSCOW, 7 Feb — RIA Novosti. The leader of the public movement “the Ukrainian choice — the right of the people”, the representative of “Opposition platform For life” Viktor Medvedchuk is convinced that the authorities in Kiev will bribe voters and resort to rigging the elections of the President of Ukraine. 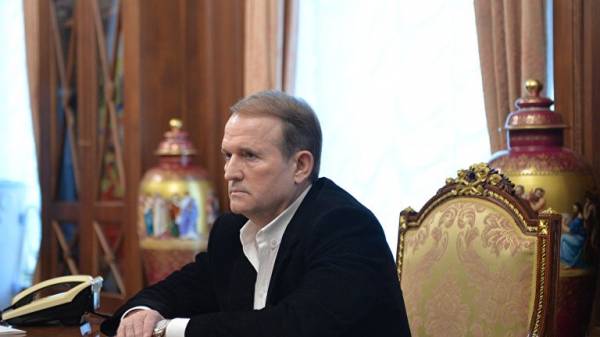 “Today will be all: fraud, bribery of voters”, — said Medvedchuk in the program “the Big game” on the First channel.

According to him, candidates will eventually be more than 40 people.

Is unreal the number of people who can’t even qualify for the highest office in the country — this is one of the largest and the biggest fraud.

In his opinion, the government has registered such a large number of people into candidates to use their right to representation of their interests according to the law on presidential elections in the electoral commissions at all levels.

The ex-President of Ukraine Viktor Yanukovych said Wednesday at a press conference in MIA “Russia today” that the President of Ukraine Petro Poroshenko will not be able honestly to win the upcoming presidential elections in the country, will try to win at any cost, including using fraud.

The leader of presidential rating is currently a showman Vladimir Zelensky, who was ready to support 21,9% of voters, the leader of the “Batkivshchyna” Yulia Tymoshenko said support 19.2% of the respondents, the current President Poroshenko — 14.8 per cent.
Presidential elections in Ukraine scheduled for 31 March 2019.

Read also: the Kremlin: a criminal case against Medvedchuk will be political repression