Russia was covered with false reports about the mining

Why can’t I calculate the telephone terrorist. 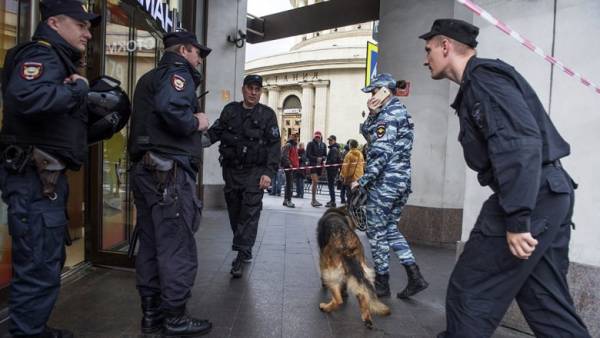 Hundreds of letters with bomb threats, tens of thousands evacuated and no arrests. In Moscow hosted a regular series of messages on mining of buildings. On the eve of the letters and calls threatening of explosion in Moscow and the region had to evacuate more than 50 thousand people. The experts have checked two hundred buildings, schools, commercial and office buildings, even residential homes. Explosives, they are never found. And this is not the first mass mailing of messages on ostensibly mined buildings in Moscow. Why the message about “mining” continue to come? And why intelligence agencies can’t stop this wave? Figured Alexander Rassokhin.

The next wave of mining continues for a second week. What is the evacuation on the eve of experienced employees and visitors to the tower “City of capitals” in “Moscow-city”, Moscow region government and Ranepa. Bomb threat received at the school, which greatly frightened children. So, Muscovite Anastasia says that the evacuation of the class in which learns her daughter, recalled the story of the Titanic:

A friend of my child was crying because she really thought that the school bomb. Children orderly, brought to the street, but the child says he was painting, as in “Titanic”: the people were very much, all went to each other’s heads, and even the PE teacher all the time whistling the whistle that the children behaved orderly, and organized, certainly, no lead.

However, it is possible that many such evacuations are already used. The first major wave of “telephone mining” has covered the country in the fall of 2017. Throughout Russia rescuers evacuated more than 2 million people, and the amount of damage, according to estimates of the Ministry of interior amounted to several billion rubles. To compute the terrorists failed calls, according to intelligence agencies, came from abroad. Almost immediately, there was speculation that the culprits have to look at Ukraine or among the Syrian rebels.

It took the FSB and after a while the head of the service Alexander Bortnikov said that some blame four Russians living abroad.

Neither their names nor information about their arrest, no one heard. It took a year and a half, and intelligence agencies still can’t identify criminals. There is no need for equipment, says the President of the Association of veterans of special units “alpha” Sergey Goncharov: “Technical equipment, it is that trace, or at least to block all possible channels at the moment, I think no one service can not do. This is an entire stratum of technical features that the opposition can not find.”

In Russia check 160 objects after calls about a mining

Sending messages or making calls, the criminals are using several connections or IP-telephony, thereby burying the truth. To understand how they work, is almost impossible. To combat this kind of terrorism alone intelligence agencies can’t. To do this, the security forces of different countries must work together, insists Director General of the intelligence Agency technology “R-Techno” Roman romachev: “Without cooperation between the security services and law enforcement agencies of the countries through which communication can be established. We see a confrontation between Russia and the U.S., China-Europe, so our intelligence agencies simply do not have the information they need, and other countries do not share this information. Therefore, telephone terrorists and enjoy their impunity, and make the same calls. Today, they will not help us, and tomorrow we do not help them — a vicious circle. It is necessary to operate everything.

Meanwhile, Russian law enforcement officers have one day to inspect hundreds of objects.

Specialists is not enough, past buildings, even formal, is delayed by a few hours. All this time businessmen suffer losses because of the closed shops and offices.

And probably not the last time.

With widespread reports of mining Moscow has faced in 2018. The damage from telephone terrorists, according to some estimates, amounted to about 150 million rubles.