How many mistakes can you make in the word EU? Photo from Parliament of Ukraine

On Thursday, the Ukrainian Parliament plans to vote on amendments to the Constitution, which consolidate the course of Ukraine to join the European Union and NATO. 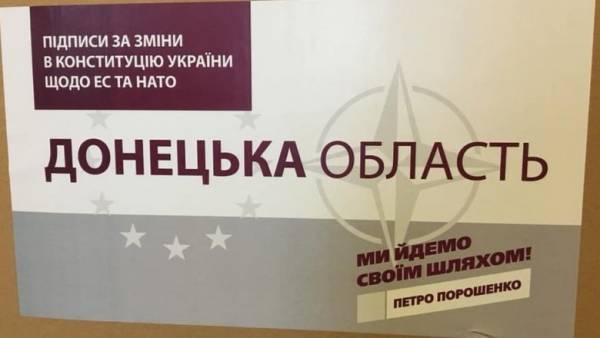 The Parliament building brought a box of a million and a half signatures in support of the amendments.

It turned out that the word EU on the box is misspelled. The fact that in Ukrainian the EU is written like that — ºC.

However, the signature sheets the word is spelled correctly.

According to representatives of Pro-presidential faction “block of Petro Poroshenko”, in support of the amendments to the Constitution collected half a million signatures.

Amendments on the initiative of Peter Poroshenko, who is now fighting for re-election as President. He promised that Ukraine will apply for EU membership and sign the action plan for NATO membership in 2024.