The Director of the school in Primorye punished for the lecture “authorities” on sex education. 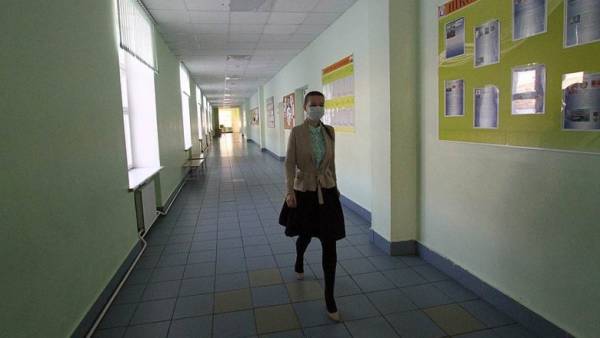 The administrative proceedings are initiated against the Director of the school in the Mikhailovsky district of Primorye after the lesson, which was allegedly carried out by criminal authorities. About this informed the official representative of the Prosecutor General of the Russian Federation Alexander Kurennoy. Informed about the lesson involving criminal authorities said the mother of one of the students. The Director of the school then the situation did not comment, but local officials said that the school to talk with students came with no criminal record parents, concerned about the form of communication of students with each other.

“On the facts of violations of legislation on education about the fact that unreasonably interrupted the educational process, failed to comply with the permit regime on school property, the district Prosecutor has brought representation to the head of school and the head of the Mikhailovsky district, — said the representative of the Prosecutor General Alexander Kurennoy, answering the question TASS in an interview on Internet channel Supervisory authority “Ether”.— In respect of Directors also initiated a case on administrative offense under part 1 of article 5.57 of the administrative code (violation of the right to education under the education law of the rights and freedoms of the students of educational institutions), it is forwarded for consideration to the court.”

In accordance with administrative code to the Director of the school is threatened with the penalty from 30 thousand to 50 thousand rubles.

During the inspection the Prosecutor’s office established that in January in the village of Pervomayskoye three local residents held a conversation with students on issues of sexual education of minors. “Lecture” was conducted during class. “These people who carried out the lecture, of course, have nothing to do with the bodies of crime prevention system that would have the right by agreement with the school and without compromising the educational process, to conduct such talks”, — said the representative of the Prosecutor General.

One of the “lecturers” were swearing in the presence of minors. Against him by the internal Affairs bodies administrative violation report under part 1 of article 20.1 of the administrative code (petty hooliganism).

As previously reported by “Kommersant”, in the middle of January 2019, the Internet was posted the resident of the village of Pervomayskaya, where it was alleged that the Director of the local school gathered in the Assembly hall of boys — pupils of 5-7 classes, to whom in the presence of the head of administration of rural settlement were made by four “visiting bandits”.

“They talked in a rude manner, and was a Mat, explained how to live “on concepts” what to do and not to do,” said the mother of one of pupils of the school.

According to her, the Director presented an invited as “looking for village”. The speakers also paid special attention to the sexual education of students, and noted that homosexuality is “in the zone” punished.

Secondary school in the village of Pervomayskaya Elena Pavlyuk, the situation is not commented. Alexander Rabotin, head of administration Sanatsenka rural settlement, which includes may day, the predecessor of Ms. pawluk as Director of the school, told “Kommersant” that “night” after I learned the version of events released by the mother of one of the students.

According to the head of the administration, meeting with students was really, but it has not involved the crime bosses, and ordinary local people with no criminal record.

“One son is studying in the seventh grade, another daughter will go to school,” explained Mr. Rabotin. According to him, came was alarmed by the information that among the students of the school have conflicts and some teenagers allow to threaten sexual violence.

“At the meeting it was said that no need to focus on America and Europe, where there are gay parades in Russia adhere to traditional values,” — said the head of the administration.

The acting head of the Mikhailovsky district Peter Heart later said the radio station “Moscow speaking” that the lectures with criminal authorities was not. “This fact was not confirmed. Held on Wednesday at 17 o’clock parent meeting in the presence of the administration, the Department of education, the district was, the parents were invited. It was verbal… children who someone has called. One child said to another: I’ll rape you, for example. Know how children communicate with each other? Came the indignant parents that children insult each other. One of the parents is obscenely put it, the Director made a remark to him. And the media fanned unknown”, — said Mr. Heart.