“It is easier to assign a new one than to re-elect these”: the governors are waiting for the resignation

Sources: in the near future would be retiring governors of five regions. 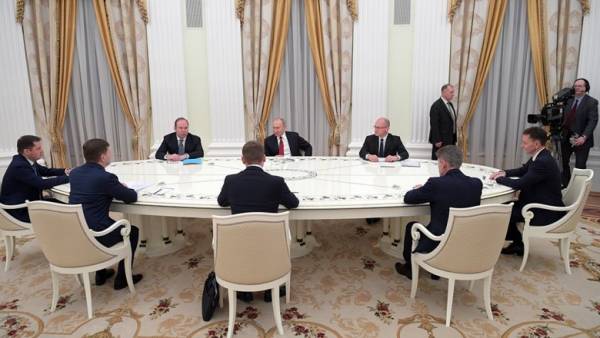 Sources “Газеты.Ru” say that in the coming months, several governors can resign. Probably, this fate befall the heads of four or five regions. As candidates “on a departure” mainly referred to those governors whose term of office expires this year. However, there is a probability of early resignation: sources believe that the arrest of Senator Raul Arashukov jeopardized the position of the head of Karachay-Cherkessia Rashid Temrezov.

Three sources “Газеты.Ru” close to the Kremlin, believe that in the near future we can expect a new wave of gubernatorial resignations. One knowledgeable source familiar with the situation, also believes this development is very likely.

In recent years, cases of mass Exodus of governors from their posts become commonplace. In the expert and journalistic communities, this phenomenon even got the ironic name “gubernatorial”. This trend is associated in particular with the new staffing concept of the political block of the Kremlin.

The President’s administration prefers to promote to senior positions younger politicians. Often they are representatives of the presidential personnel reserve.

However, apparently, this time the return will not so much. The sources referred to about five candidates “exit”.

It is known that the political unit is constantly measuring the effectiveness of governors according to various indicators. Last year, following the meeting of the Presidium of the state Council approved a list of criteria for efficiency of heads of regions. These include the credibility of the institutions, including the President.

After the gubernatorial election last year, which in some regions reached the second round of the Federal centre also drew attention to the popularity of the Governor among the electorate. The low popularity of the ex-head of the Vladimir region and the Republic of Khakassia Svetlana Orlova and Viktor Zimin often due to their defeat.

With this in mind, replacing weak candidates before the upcoming election seems logical.

RTVI earlier, citing its sources reported about the likelihood of Governor’s resignations. As contenders for the departure channel called the heads of Volgograd and Murmansk region Andrey Bocharov and Marina Kovtun.

However, sources “Газеты.Ru” I do not think Bocharova main of possible candidates on a departure. One of the interviewees even said that the Governor of the Volgograd region “all right.”

To say the same thing about Kovtun sides “Газеты.Ru” I can not: according to them, the chances that she will take part in gubernatorial elections this year, really small. The head of the Murmansk region there are conflicts with local elites. The sources predicted her resignation last year, but somehow she managed to hold on to his position. This time “a principled decision” on its replacement seems to be accepted, says close to the Kremlin source.