A team of astronomers have discovered an unusual star cluster and a small galaxy that all these years successfully “hiding” behind the light of the stars. 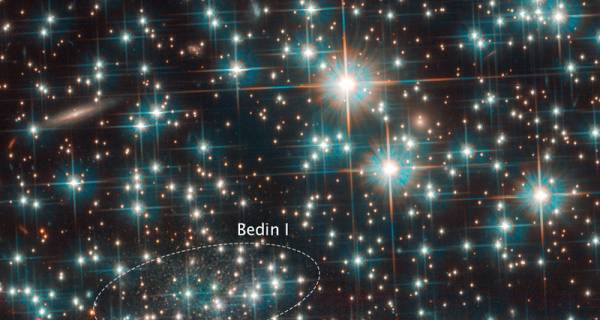 For all time of its work the space telescope “Hubble” discovered thousands of galaxies, many of which are separated from Earth by millions of light years and are located in the farthest regions of the visible Universe. However, he recently made a unique discovery so close that it was for the scientists a big surprise.

, Astronomers were able to look into the corona of a black hole

Researchers have detected a cluster of stars within our own galaxy, the milky Way, which is called NGC 6752. It otstaet from us by only 13 000 light-years, and initially astronomers wanted to explore the cluster itself for anomalies and useful data. However, they had to quickly switch to another object because the star cluster was discovered… an entire galaxy. It looks poorly developed, but because all these years “hiding” in plain sight. By galactic standards it is very close, only 30 million light years from Earth.

The galaxy was named Bedin-1 after the leading researcher of the project Luigi Bedini. It is a dwarf galaxy that is similar to the “brothers”, but with one exception — it is extremely remote from other space objects. Now she called one of the most isolated galaxies in the Universe. It found a miracle, and now experts believe that the light of star clusters may hide other such galaxies. To find them will help WFIRST telescope, which NASA is about to launch into orbit.