BELGRADE, 3 Feb. /TASS/. Anti-government rallies were held on Saturday evening in several cities in Serbia — Kragujevac, Kula, Kosovska Mitrovica, Požega, Pirot. The most massive was the capital’s protest, said the correspondent of TASS from the event. 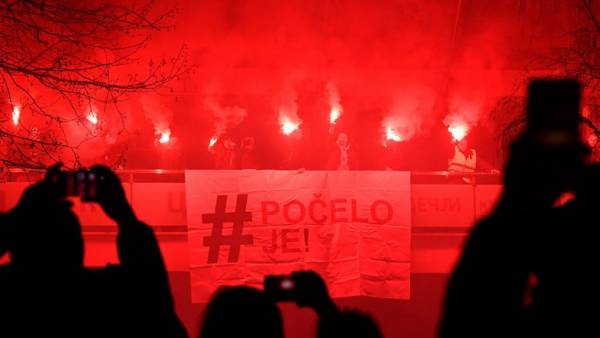 Activists came to the rally with placards: “there was a wolf time”, “Return of retirement”, “no more lies and promises, seniors are hungry.” The demonstration started on the site of the faculty of philosophy, University of Belgrade. Then the column of protesters moved through the streets, blocking vehicular traffic. Police stopped traffic on main streets, providing easy passage of the demonstrators.

The main slogan of the procession was the motto “One in five million”, which appeared after the statement of President of Serbia Aleksandar Vucic that he will not tolerate the illegal seizure of power, “even if the protesters will be five million.” After the rally and March, activists lit flares and left authorities boxes with letters which explained why involved in the protests.

This time the action was joined by the producers of raspberry unhappy with the purchase prices for their products. Beside them in the column were the teachers of the faculty of political Sciences, which demanded the resignation of education Minister Mladen Starcevich.

Protests have taken place ninth consecutive week. The reason for the beginning of the protests was the beating of one of the opposition Borko Stefanovic in kruševac a group of attackers. The opposition in this regard, accused the authorities of creating an atmosphere of violence and urged his supporters to take to the streets.

The Ministry of internal Affairs of Serbia as at present, did not report any data on the number of protesters.