The Pentagon is afraid of revenge “Islamic state”

The military predict the negative consequences of the withdrawal of US troops from Syria. 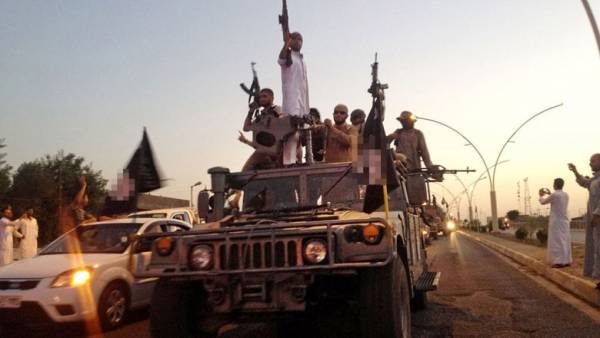 Without pressure from the United States and its allies, the terrorists of the “Islamic state” (IG; organization banned in Russia) in less than a year can regain its lost positions in Syria. This follows from the Pentagon report, to be submitted next week. About the dangers of the planned withdrawal of U.S. troops from Syria and have warned members of Congress: senators supported an amendment to the bill on the country’s politics in the middle East, cautionary from the reduction of troops. However, it is Advisory in nature. A US President Donald trump has made it clear that to change course is not going to.

“I would say that more than 99.5% of the territories controlled by the Islamic state, returned to the Syrians. And in the coming weeks, this figure will reach 100%”, — said Tuesday, January 29, acting Minister of defense Patrick Shanahan. He noted that the IG is not able to operate effectively because the coalition forces “destroyed a large part of the leadership” of the terrorist organization.

Meanwhile, in the beginning of next week should be submitted to the quarterly report of the Pentagon inspector General about the operation “Unwavering commitment”. And his tone is expected to be quite different.

According to sources, NBC News, familiar with the draft report, it States: ISIS is able to regain lost territory in just 6-12 months.

The report was prepared using information from the military, U.S. government agencies and from open sources.

That IG can still count on a rematch, stated in the report on global security threats (Worldwide Threat Assessment), which is prepared annually by the US intelligence. Presenting on Tuesday of this document, the Director of National intelligence Daniel Coates said that in the ranks of ISIS are “thousands of fighters in Iraq and Syria,” a worldwide group supporting thousands of people.

The report also warned: reduction in pressure will allow the IG to reactivate its activities and to restore the lost positions.

Recall operation “Unwavering commitment” started in Iraq and Syria in June 2014. In varying degrees, it was and remains involved more than 20 countries. The us military were deployed to the region in October 2015. On 19 December last year, the President of the United States Donald trump announced near the beginning of the withdrawal of us troops from Syria. According to Mr. trump, they managed to complete the task is to defeat ISIS.

Now in Syria there are about 3 thousand servicemen of the US army (their number in recent weeks has increased in connection with necessity of preparation of a large-scale operation on withdrawal). According to media reports, Syria has created 12 U.S. military bases and Outpost, two. This four military targets in the province of hasakah, six in the province of Aleppo, one in Deir ezzor, two in raqqa. In the province of HOMS is a FL-TANF, which controls the road from Iraq to Syria. It, as reported by NBC News, citing its sources, the Americans will leave last. If you do leave: the debate about the wisdom of such a step in the White house are continuing and, in particular, against withdrawal from the base At TANF acts as Advisor to the President of the trump national security John Bolton. Recall that in early January, Donald trump said the withdrawal would take place, but American forces “will not go away completely,” while the IG “will not be finished.”

the results of the US military operation in Syria

December decision Donald trump has received the support of Russian President Vladimir Putin, who called it correct. But the concerns expressed by representatives of a number of EU and us lawmakers. By the end of January the position had not changed. In the night of Friday Moscow time, the U.S. Senate in early voting supported (63 votes in favour, 23 against) the further advancement of amendments to the bill on U.S. policy in the middle East, which States: reducing the presence of American troops in Syria and Afghanistan may have negative consequences. The final vote to be held next week. “I believe that threats remain. “Islamic state” in Iraq and Syria and al-Qaeda is not yet defeated, and American national security interests require a continued commitment to our mission there,” he said, explaining the meaning of the amendment, its author, Senate majority leader, Republican Mitch McConnell.

However, the initiative of legislators is a recommendation. A determined Donald trump, it seems, December is not diminished. “I was elected, when he said that we end these endless wars,” said Donald trump in an interview with The New York Times, referring to Syria and Afghanistan.