America hesitated at the exit from the contract

The United States will give Russia six months to eliminate the missiles. 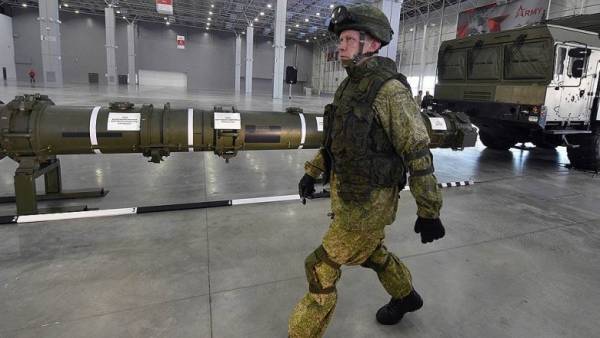 The chances of saving the Treaty on the elimination of intermediate-range and shorter-range nuclear forces (INF) become all the more elusive. On Saturday the deadline of the ultimatum of Washington, demanded from Moscow to destroy cruise missiles, ground-based 9М729, supposedly tested for a banned range. Moscow condition is not fulfilled and is not going to do it. Failed to resolve the conflict and in the course of several rounds of negotiations, the last of which was held on Thursday in Beijing. Meanwhile, Washington has suddenly made it clear that he is ready to extend its ultimatum for another six months.

On Thursday in Beijing were the most important negotiations of delegations of Russia and the United States. On Saturday, the deadline for the us ultimatum for the INF Treaty, and the meeting seemed almost the last chance to prevent the breakup of existing for more than 30 years of the agreement. However, the hopes did not come true. “Sorry, no promotion. Position of the American side very hard, ultimate, — said after the meeting, Deputy foreign Minister Sergei Ryabkov.— We told the American side that in the regime of attempts to blackmail Russia to conduct a conversation is impossible.”

However, Sergei Ryabkov in December last year in an interview with “Kommersant” said that the United States “have already decided everything,” and a two-month ultimatum of Russia has put forward “to redirect to the us critical reaction of at least part of the world community.”

U.S. Deputy Secretary Andrea Thomson, in turn, was confirmed on Thursday to Reuters that the meeting in Beijing of the positive changes brought. In a recent interview with “Kommersant” she categorically rejected the claim that Washington is just looking for an excuse to exit the Treaty, and called upon the only condition of his salvation: Russia must destroy 9М729 rockets and launchers for them.

To participate in organized by the Ministry of foreign Affairs of the Russian Federation of January 18 closed briefing on the controversial weapons systems, as in the Russian defense Ministry on 23 January, the outdoor screening of some of its elements, American officials refused. The Russian side requirement about destruction of rockets repeatedly called unacceptable.

As expected, February 2, the Americans will announce the “suspension” of its obligations under the INF Treaty and notify Russia about getting out of it. In such a scenario six months of the agreement, for the first time allowed to destroy an entire class of threatening European security rockets and is considered one of the pillars of modern systems of arms control, will cease to operate.

Sergei Ryabkov on Thursday said that “the whole responsibility for what is happening in Washington.” American officials and representatives of other countries—members of NATO, however, in recent weeks repeatedly said the opposite. According to them, it is Russia that made the breach and has not expressed readiness to resume its obligations. This chart re-stated NATO Secretary General Jens Stoltenberg.

Meanwhile, many experts, including Western, believe that both sides have shown a lack of political will to save the Treaty.

For example, the expert of the Brookings Institution, former U.S. Ambassador to Ukraine Steven Pifer, has repeatedly criticized the actions of the Russian authorities, said recently that Washington should agree to the proposal of Moscow about the show 9М729. In his opinion, the US could make Russia a detailed briefing until the analysis of the controversial system and demonstrate its fuel tank and other elements. We will remind, according to Washington, this missile was tested to a range of over 500 km, while the INF Treaty prohibits the manufacture, test, and deploy land-based missiles with a range of 500 to 5,500 km. Steven Pifer noted that the concessions the United States could demonstrate Russia causing it concern located in Romania launchers MK 41 in the complexes Aegis Ashore, which hypothetically can be used to launch cruise missiles. “Unfortunately, the United States was not ready for this,” he complained.

Scientific Director of the Institute of USA and Canada studies Sergey Rogov Thursday at a round table in MIA “Russia today”, in turn, noted that Russia was late with the offer to show the Americans a controversial missile. In addition, in his opinion, to call them had not in suburban Park “Patriot”, and Kapustin Yar, where testing of weapons and military unit in the Urals, which allegedly has the division of prohibited missiles.

Meanwhile, it’s unclear how it will look in the “suspension” of the United States of its obligations. The text of the Treaty there is no such thing. In his 15th article only says that “each of the parties in exercising its national sovereignty, have the right to withdraw from the Treaty if it decides that the related content of the present contract exclusive circumstances have threatened its higher interests.” “She shall notify the other party of its decision to withdraw from this agreement six months before release,” reads the document.

At the same time Sergey Ryabkov explained to “Kommersant” that, in fact, there is nothing to suspend, as all the missiles have long been destroyed, and the inspections completed.

What the US mean by “suspend”, Andrea Thomson said in an interview with Deutsche Welle: “We will be able to do research and development of systems similar to those now posed by Russia into service”. Meanwhile, to conduct research and development in this area and so the Treaty does not prohibit. In the current Pentagon budget even includes funds under the relevant research.

To break the Treaty the United States before final release from it can testing, production and deployment of prohibited classes of missile systems. But the Chairman of the PIR Center, Vice-President of the Russian Council on international Affairs General-Lieutenant Evgeny Buzhinsky said Thursday that “while the United States has nothing to test, produce or deploy on the ground”, since the relevant research work was launched not so long ago. In other words, this means that, despite the expected “suspension”, USA for at least another six months or more will in fact comply with the terms of the contract.

In the same interview with Deutsche Welle, Andrea Thomson unexpectedly signaled that the US is ready to extend its ultimatum to Russia for another six months.

“We will suspend its participation (in a Treaty. “B”) for six months, during this time Russia can return to the framework agreement,” she said. Earlier, U.S. officials said to fulfill the conditions of Washington’s question about “launch breaker” Moscow has until 2 February. After Thursday held talks in Beijing Andrea Thomson said that the United States hopes to continue consultations with Russia. “Diplomacy is never exhausted,” — said assistant Secretary of state.

Sergei Ryabkov, in turn, assured that Russia hopes to resolve the conflict. “We will continue, the hands do not drop, — said the Deputy head of the foreign Ministry.— We are willing to seek solutions, although this would be significantly more difficult.”