Two su-34 collided in the sky in the far East

Russia’s defense Ministry confirmed a clash between two fighter-bombers su-34 in the sky over the sea of Japan. “The crew ejected. An-12 aircraft and two helicopters Mi-8 search and rescue forces search for pilots in the area of the ejection”, — stated in the message Department (quoted by “RIA Novosti”). 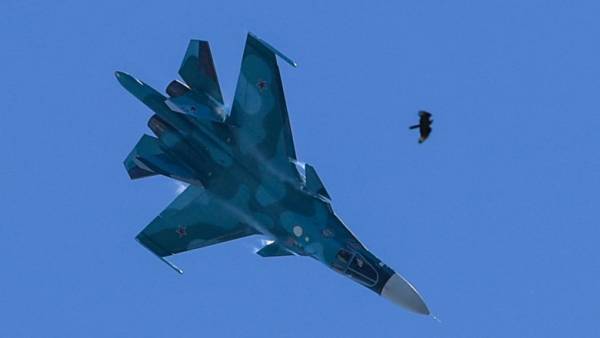 According to the defense Ministry, the aircraft practiced maneuvering, during which there was a touch in the air. Su-34 the far Eastern Association air force and air defense performed the flight without ammunition.

The source of “Interfax” was told that rescuers from the air was able to see in the Tatar Strait emergency lights, presumably, liferaft su-34. According to the Agency, a few minutes ago, there I saw two orange parachute dome.

Later, the defense Ministry said that a life raft with the crew ejected found.

“The fishing vessel in the vicinity of the ejected pilots of su-34 in the next 20 minutes you will come to the place of detection of individual liferaft”, — stated in the message Department. It is also noted that the rescue operation takes place in adverse weather conditions, “caused by the strong wind and waves in 4 points”.

The defense Ministry noted that the rescuers lifted from the helicopter one of the pilots who were on a raft. His condition, according to the Agency, consistently.

Previously TASS with reference to sources reported that during flights in the far East faced two fighter-bomber su-34. The Agency said that the su-34 survivors of the crew fell into the sea. According to “Interfax” the second bomber landed with a failed engine. As said the Agency, the two fighters disappeared from the radar near the airport Khurba under Komsomolsk-on-Amur.