BELGRADE, 17 Dec — RIA Novosti. Kosovo has undertaken a series of provocations, including the decision on the establishment of the army, as Russia and Serbia, believes that this could lead to destabilization in the Balkans, said Russian President Vladimir Putin. 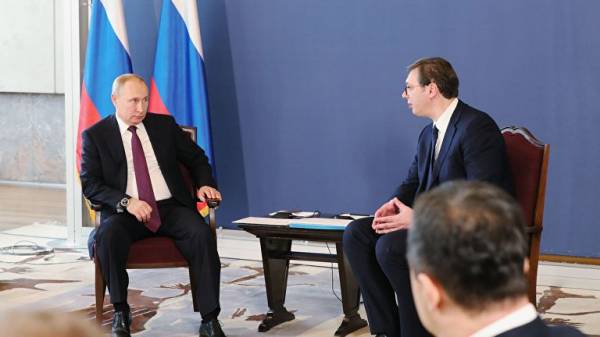 “Russia, like Serbia, is interested in the situation in the Balkans remained stable and safe. In particular, with regard to Kosovo, the Russian position is well known: we support the achievement of the Belgrade-Pristina viable and mutually acceptable solution on the Kosovo settlement on the basis of resolution 1244 of the UN security Council”, — Putin said at a press conference after talks with his Serbian counterpart Aleksandar Vucic.

He noted that Pristina has recently taken some provocative actions that seriously aggravated the situation.

Primarily I mean the Kosovo side of 14 December about the formation of the so-called army of Kosovo. Of course, this is a direct violation of the resolution.

“Russia fully shares the concern of the Serbian authorities and the citizens, knowing that such irresponsible actions of Kosovo can lead to destabilization in the Balkans”, — said the leader of the Russian Federation.

See also: President of Serbia has accused the US, Britain and Germany in the creation of an army in Kosovo