Scientists have created a robotic skeleton that showed how moving animal that lived on Earth about 300 million years ago. 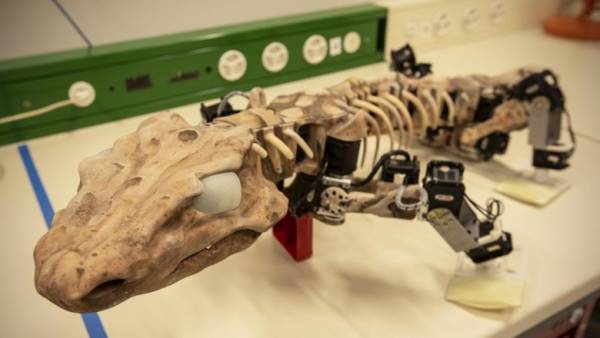 Researchers from the Federal Polytechnic school of Lausanne (EPFL) and Berlin’s Humboldt University have built a robot, in order to find out how moved Orobates pabsti ancient animal that lived about 300 million years ago. Appearance of the species resembled a large Salamander; as noted, this is an important point of the evolutionary tree that connects early amphibians, reptiles and mammals that would appear later.

During the download an error has occurred.The news is

the bite Force of a Tyrannosaurus Rex did not impress scientists

For starters, experts have created a digital simulation of gait Orobates pabsti — on the basis of what is known through analysis of fossilized skeletons and peculiarities of gait similar to modern animals. The researchers then, using the virtual model, appreciated what gait should have been the ancient beast, given the known prints (the options in the simulation, of course, was limited more or less realistic).

Next, the researchers had to move a virtual copy of Orobates pabsti in the real world. To do this, the researchers created OroBOT — the robotic skeleton of the animal. He also had a custom walk so that scientists more accurately re-adjusted her — given the known data. According to scientists, is most similar to Orobates pabsti gait now have a Cayman (small alligators).

The study was published in the Nature magazine, briefly about work it is reported in the press release on the website of the EPFL.