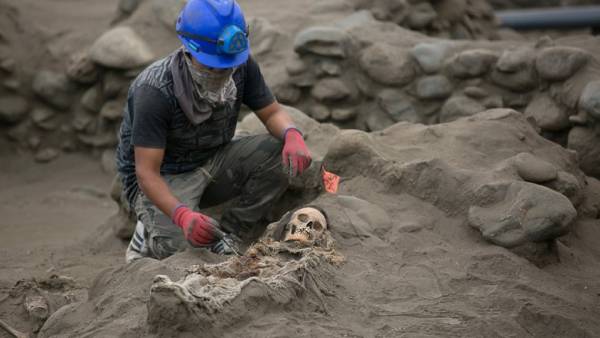 “We found the burial with the remains of 132 children and 262 Lam. The latest is that of the 132 children, 10, apparently, belonged to the Chimu elite. They were dressed in hats with feathers and the clothes are very good quality, painted materials,” — said the archaeologist.

According to Prieto, who leads the group of researchers responsible for the find, archaeologists are working in the district of Huanchaco in Northern Peru. The archaeologist said the discovery of the remains of children, whose age varies from 6 to 14 years, is the result of work carried out in 2016 under the auspices of the National Geographic.

As stated by the archeologist, the discovery indicates that in the culture of the Chimu sacrificed not only children from the lower social strata, but also “leaders of the CPM also sacrificed their own children”, as evidenced by the luxury that some children were buried. According to the time when, presumably, it was made a sacrifice, one of the alleged purposes of human sacrifice was freedom from adverse natural events (particularly El niño).