Open the anomalous system in which four stars

Sometimes in a star system there is not one, but two stars. In exceptional cases, three. And now astronomers have discovered a strange system with four stars and the unusual protoplanetary disk. 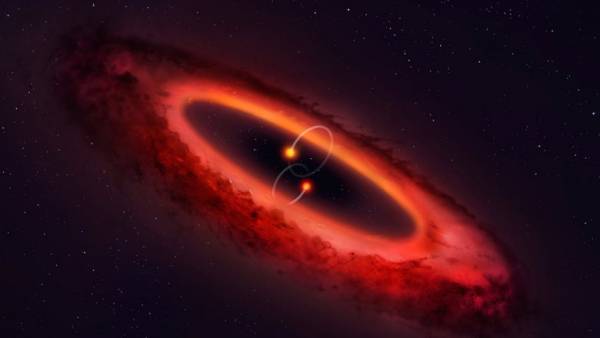 In our own Solar system has only one star and a handful of planets. However, in space there are other, more complex star systems with two or — much more rarely — even with three stars that revolve around each other in complex orbits. However, the new discovery has proved that this is not the limit: the team of astronomers was able to find in the Universe a system with four stars. Surprisingly, but all the time she “hid” in total, 146 light years from us!

Found the brightest object in the Universe

System called HD 98800 was discovered by astronomers using Large millimeter array Atacama, a giant radio telescope, located in Chile. The radio telescope was the key to opening this system, because the stars were surrounded by a protoplanetary disk — the ring of gas and dust from which in the future will form a new planet. But until then, this ring absorbs much of the light coming from the system — that’s why she remained hidden for so long.

But where there is light, permeate the radio waves. With the radio telescope, scientists were able to detect four separate star, inside the dust cloud. They form two pairs — one right in the center of the system and the other on the first orbit (about a trillion kilometers). The outer pair of stars called Aa and Ab, and the stars internal — Ba and Bb.

The system itself is a unique phenomenon, but even more unusual it makes the protoplanetary disk. In most systems it is aligned relative to the primary star.News

For example, in the Solar system all the planets and most asteroids rotate approximately in the same plane with the Sun. But for HD 98800 is not the case — it has a gas-dust disk is located at a right angle relative to the Central stars. This is the first of the known systems, with a perpendicular disk — like anomaly promises many amazing discoveries. Perhaps if astronomers can detect and others are “older”, it will be possible to observe planets revolving in odd orbits from all angles. In turn, this can lead to the formation of a new, still unknown to the science types of planets.

However, there is another scenario: in such conditions of the protoplanetary disk simply will not be able to form planets. Remains to continue the search — in space is still a lot of strange things unknown to mankind.