The budget disappeared in the “Ultraviolet”

Identified major theft when you create a Russian rival the Hubble space telescope. 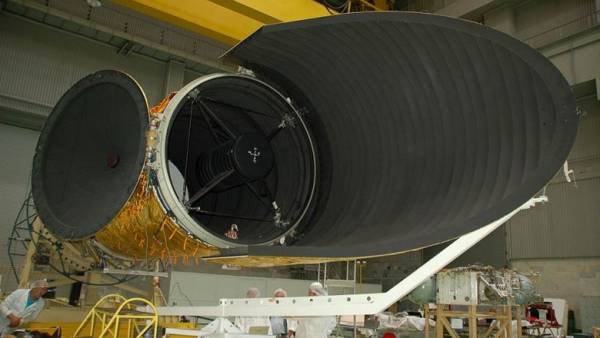 As it became known “Kommersant”, the interior Ministry is investigating a criminal case of embezzlement of budget funds allocated for creation of a new space telescope T-170M, included in the Federal space program. A telescope with a primary mirror diameter of 1.7 m have to compete with the American Hubble, becoming the main element of the “world space Observatory “Ultraviolet””.

According to “Kommersant”, the investigation into the embezzlement of budget funds allocated for the creation of a space telescope T-170M, investigators are since December 24 last year. A criminal case by the investigator of Department of internal Affairs on closed administrative-territorial formations and on especially important and regime objects “vlasikha” (Moscow region) on signs of the crime provided by part 4 of article 159 of the criminal code (fraud in especially large size). Operational support of the investigation conducted by the staff of the economic security service of FSB.

The basis of the case, according to sources, “b”, formed insights finished last year audit of performance of the state contract № 361-75/11 dated 25 December 2012. In the framework of this agreement was to be carried out various development work associated with the preparation of the creation of “world space Observatory “Ultraviolet”” that in the Federal space program appears under the designation “Spectrum-UV”.

The basic element of the space complex was supposed to be a super telescope T-170M, over creation of which has Scientific-production Association named Lavochkin and the Institute of astronomy. Between these structures August 8, 2012 and was signed the subcontract in the amount of 2 billion rubles In the framework of this agreement was planned, particularly, creation of the various elements of the telescope.

However, as found by the investigators, after conclusion of the contract with the NGO for the Institute of astronomy has signed three agreements with RPE INKOS. This society in the framework of the project “Spectrum-UV” assumed the obligation to manufacture in 2013, the technical equipment for the main and secondary mirrors of the telescope, a variety of scientific instruments and carry out “other special work.”

The value of the contract amounted to 31.1 mln. However, according to investigation, all of these works were performed at the production facilities of NPO Lavochkin employees of the Association itself without the involvement of third parties.

Thus, according to the investigators, employees of NGOs, Institute of astronomy and NPP INKOS, creating a fictitious scheme of production of technical work, stole with it more than 28.5 million RUB.

“This is the original calculations made in the framework of the ongoing investigation, therefore, the amount of the alleged damage can still grow,” noted the sources.

Yet, according to “Kommersant”, in a criminal case has no suspects and accused persons, however, according to sources in the interior Ministry, they will appear in the near future, after it’s “fixed already assembled the evidence base.”News

It should be noted that a space complex “Spektr-UV”, which appears in the case file, according to its developers, can provide a breakthrough in astronomy and astrophysics, giving scientists new opportunities for understanding the nature of various celestial bodies, active galactic nuclei, intergalactic gas clouds, extragalactic astrophysics, and other processes. A key element of this complex should become the newest ultraviolet telescope T-170M with a primary mirror diameter of 1.7 meters, according to developers, will become a direct competitor to the famous American space telescope Hubble in the field of high resolution spectroscopy.

The project “Spectrum-UV” was conceived in the early 90-ies of the last century, and the system startup was scheduled for 1997, however, the complex is not working so far. In June 2018, Roskosmos, announced the postponement of the launch of the basic elements of a space Observatory which is planned from the Baikonur East, 2024.News

On the Hubble telescope is broken main camera

This is not the first investigation related to NPO Lavochkin, which is recognized as the victim on this fraud case. As already reported by Kommersant, last year the former head of the NGO Sergey Lemeshevsky, and the former head of the legal Department of the enterprise of Ekaterina Averyanova was arrested in the case associated with providing bogus legal services and payment of the so-called prizes of success of the legal company “Tretyakov and partners”. All of them also accused of fraud.

“Roskosmos”, which includes NGOs, “Kommersant” reported that fully cooperating with the interior Ministry, the investigation by providing all requested information. To comment on the substance of the investigation the Corporation did not.

Imagine yourself an alien. What can you tell about people “the Voyagers”: a photo and музыкаRTVI figured out that I can see the aliens with discs recorded 40 years ago.