The United States called the National Assembly, the only legitimate authority in Venezuela 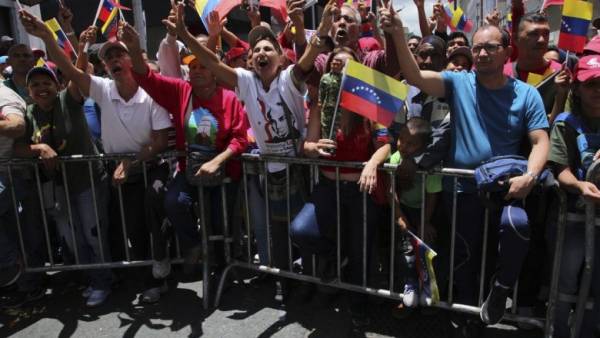 The United States believes the National Assembly (Parliament) of Venezuela, the only legitimate institution in the country and welcomed the inauguration of its new head of Juan, Guido. This is stated in a statement on Saturday the statement of the Deputy head of the press service of the state Department Robert Palladino.

“Today, the United States welcomes the entry into office of members of the new leadership of the National Assembly of Venezuela headed by Deputy Juan Guido,” said Palladino.

The national Assembly is the only legitimate and the last remaining democratically elected institutions, which truly represents the will of the people of Venezuela.

Venezuela’s Parliament is under the control of political opponents of President Nicolas Maduro since December 2015. On Saturday the new head of this body, Juan, Guido said about the necessity of creating the country’s transitional Federal government. He believes that if Maduro refuses to leave the post of head of state, it is necessary to “unite and launch a joint action aimed at the mobilization of the people, the National Assembly, the armed forces of Venezuela and the international community in order that he [Maduro] was not a choice.”

On Friday, the members of the Group Lima said the plea of the new presidential term, Maduro, will assume the position of head of Venezuela on January 10. They called on the Venezuelan leader to withdraw from the inauguration and hand over Executive power to the Parliament. The Minister of foreign Affairs of Venezuela, Jorge Arreaza, in turn, said that members of the Group of Lima, by making such a statement, comply with the instructions from Washington. Thus he reacted to the information that the Secretary of state Michael Pompeo decided to take part in the meetings in Lima on video.