A criminal case was opened after the derailment almost two dozen cars of a freight train that occurred near the station, Marasino the Sverdlovsk railway. 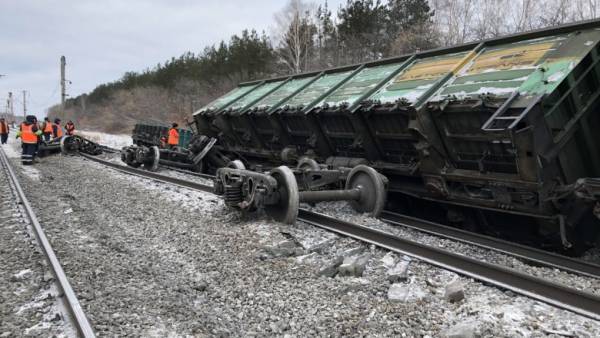 As noted on the website of the Ural Department of transport TFR, the investigation is conducted under part 1 St. 263 criminal code (violation of safety rules of movement and operation of railway transport). It also specifies that the derailed wagons was 18 and not 16 as previously reported.

The incident occurred early on the morning of 1 January. With derailed, and then capsized, 18 cars loaded with coal. Victims in the result of emergency, however, according to preliminary data, damaged about 150 m of the railway and about 300 m of a contact network.

On the night of December 1, 35 cars derailed on the section of TRANS-Siberian railway Omsk-nazyvayevsk. Including went several platforms with tracked military equipment, which was sent for repair. In fact the incident a criminal case under article about infringement of safety rules of movement and operation of railway transport.