Around 270 containers, including hazardous chemicals, fell in the North sea

The HAGUE, 2 Jan. /TASS/ — the three hit the water containers are organic peroxides — chemicals that cause irritation in contact with skin and mucous membranes. 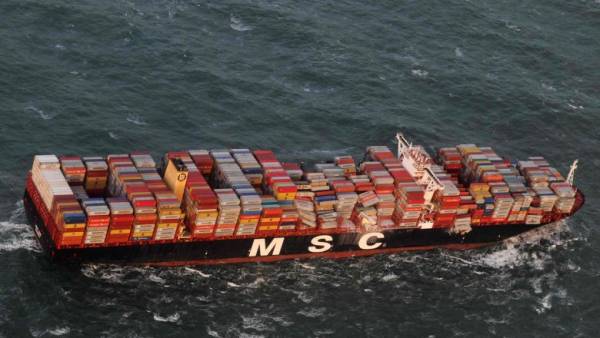 Around 270 containers, including hazardous chemicals fell off a cargo ship Zoe in the North sea. This was announced on Wednesday, the Dutch broadcasting Corporation.

According to the channel, the cause of the incident, which occurred in the night from Tuesday to Wednesday near the German island of Borkum, were the strong waves.

A large part of the containers currently floating in the water, at least 21 of them washed up on the Dutch coast.

According to available information, three hit the water containers are organic peroxides — chemicals that cause irritation in contact with skin and mucous membranes. In this regard, the coast guard of the Netherlands urged local residents not to attempt to open the container and do not touch their content, and also to report washed ashore the containers to the police or emergency rescue services.

Local officials expect that the elimination of the consequences of the incident will take several days.

A German Navy Pollution Control aircraft (57+05) is patrolling over the North Sea in the area where a large container ship (MSC Zoe) lost containers 270 earlier today. They are washing ashore mainly on the Dutch Wadden Islands (Waddeneilanden). #potn #avgeek pic.twitter.com/R1z5ZfwnCl

The ship Zoe is one of the largest container ships in the world. The ship is capable of carrying more than 19 thousand containers.