Zakharov: trump canceled the meeting with Putin not because of the incident in the Black sea

MOSCOW, 30 Nov — RIA Novosti. Trump canceled the meeting with Putin rather because of the political situation in the US, not in connection with the incident in the Black sea, said the official representative of Russian foreign Ministry Maria Zakharova. 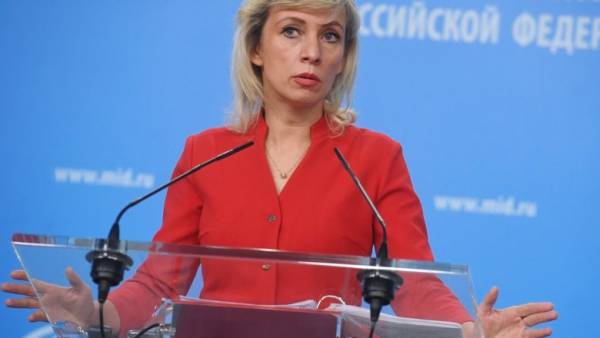 Earlier, trump wrote on Twitter that after reviewing a report about the incident in the Kerch Strait, where the ships of the Ukrainian Navy, was detained for violation of border of the Russian Federation, cancels meeting with Putin in Argentina in the framework of the G20 summit and expressed hope that “the content summit” after resolution of the situation.

Is the provocation, which was organized by Kiev in the area, the real reason for the cancellation? Publicly we heard exactly this explanation, we took note. Is this a reality? I think we need to look for answers in the political situation in the United States. Here it is dominant in the decision — the internal political situation in the United States.Maria Zakharova the official representative of Russian foreign Ministry

On Sunday, three ships of naval forces of Ukraine “Berdyansk”, “Nikopol” and “Yana Kapu” — violated the border of Russia, included in the temporarily closed waters of the territorial sea of the Russian Federation and moved from the Black sea to Kerch Strait. They maneuvered in a dangerous manner, did not obey the lawful demands of the Russian authorities and was arrested.

Russian President Vladimir Putin called the incident in the Kerch Strait provocation, noting that among the crew members of Ukrainian vessels violating border of the Russian Federation, were two employees of the security service of Ukraine, who actually led the operation. Meanwhile, Putin stressed that Russian border guards had performed their functions for the protection of the state border.

According to him, the provocation in the Black sea tied to a low rating of the President of Ukraine Petro Poroshenko before the elections.

Putin said that Poroshenko has a chance of not even go in the second round, so he needs to do something to exacerbate the situation and create insurmountable obstacles for competitors, especially from the opposition.