MOSCOW, November 29 — RIA Novosti. Restrictions on travel abroad or foreign exchange transactions for the Ukrainians in connection with the imposition of martial law in Ukraine will not, they will affect the citizens of Russia, said on Thursday the President of Ukraine Petro Poroshenko. 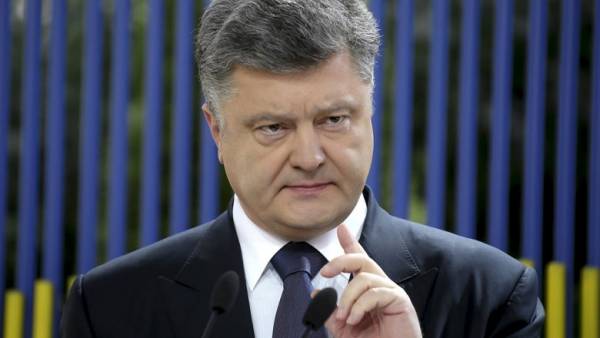 Thursday after the incident in the Black sea, further exacerbating relations between Kiev and Moscow came into force the law on the introduction of martial law in ten regions of Ukraine, and internal waters of the Azov-Kerch water area for 30 days. This mode provides the possibility of temporary restriction of constitutional rights and freedoms of citizens, including the right to participate in elections, to freedom of thought and speech.

“No need to run to the store and buy matches and salt. No restrictions on withdrawal of deposits, operations on currency exchange, trips abroad for Ukrainian citizens will not. For Russian citizens, these restrictions will be imposed. And I think it is quite justified”, — wrote Poroshenko on his page on Twitter.

The Verkhovna Rada of Ukraine on Monday approved a decree Poroshenko on the introduction of martial law after the Ukrainian Navy ships violated the border of Russia in the Black sea and was detained by Russian ships. Poroshenko said that he had proposed the Parliament to introduce martial law for 30 days, not 60, so as not to disrupt the elections to be held on March 31.

On Sunday, three ships of naval forces of Ukraine “Berdyansk”, “Nikopol” and “Yana Kapu” — violated the state border of Russia, included in the temporarily closed waters of the territorial sea of the Russian Federation and moved from the Black sea to Kerch Strait. They maneuvered in a dangerous manner, did not obey the lawful demands of the Russian authorities. The Ukrainian ship with 24 sailors were arrested, three Ukrainian military were wounded, they are hospitalized and receive medical care, seafarers ‘ lives are not threatened. After the incident concerning them criminal case on illegal crossing of the state border.