In Georgia, the presidential elections were won by Salome Zurabishvili

In the presidential elections in Georgia defeated independent candidate Salome Zurabishvili. After processing 100% ballots, she scored 59,52% of the vote. On November 29 reported on the website of the CEC. 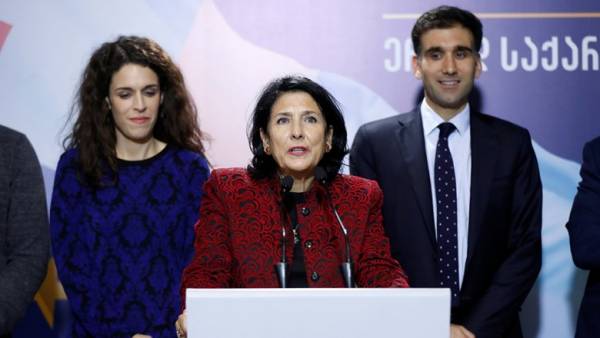 A member of the opposition Union of “Strength in unity” Grigol Vashadze scored 40,48% of the vote. The turnout in the election was 56,23%.

In the first round of elections, held on 28 October, failed to identify the President because none of the 25 candidates obtained more than 50% of the votes. Zurabishvili received 38.6% of the votes, and Vashadze is 37.7 per cent.

the United States will be built in Georgia, the airfields

27 Nov headquarters Vashadze announced about possible violations during the electoral process. According to the opposition, electoral lists could falsify. Observers compared the lists with the first and second rounds and noticed that in the second there were 11 thousand new names.

Then on voting day, the Chairman of the Georgian Parliament Irakli Kobakhidze told journalists that the election environment is calm and serious violations noted.

During the election campaign Zurabishvili accused of “Pro-Russian position” after her statements about the August war 2008. In comments to reporters, she said that Georgia provoked a new wave of conflict, when military methods answered “Russian provocation”.

Zurabishvili last held the post of the head of the Ministry of foreign Affairs, and also worked as extraordinary and Plenipotentiary Ambassador of Georgia in France.

For Georgia, this is the last direct presidential elections. In 2017, the country adopted a new Constitution, according to which the next President in 2024 will choose a special electoral Commission of 300 delegates.

See also: In Georgia, hundreds of thousands of citizens promise to write off debts