InSight delivered to Mars seismograph and nanosatellites. Why engineers call a miracle landing

Launched in may, the station overcame 484 million km, Scientists hope that the result will be able to understand how to form the rocky planets, including Earth, and how the Red planet. 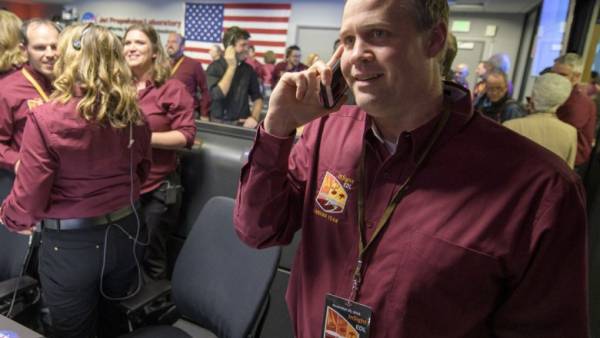 The descent module with the Mars InSight device landed on the red planet. In the near future, NASA engineers will test all his equipment and will begin work for the first time involves more than just studying rocks on the surface.

The device is equipped with a special tool that will allow you to drill to a depth of 5 m. By earthly standards this is more than modest (industrial wells in oil and gas can be a depth of 5 km), but all previous missions to Mars have allowed at best to scrape a few centimeters from the interested researchers of the stone. Mill on the Curiosity Rover in its characteristics closer to conventional drills, and “laser gun” on the same machine and is not designed for burning of holes: her appointment was the evaporation of a tiny fragment of rock to analyze the spectrum of the resulting flash.

Immersion not by centimeters and meters, however, will not give the opportunity to look at samples.

The purpose of InSight not to pick up dirt from the deeper layers, and to measure emerging from the depths of Mars the flow of heat. This information will allow us to better understand the structure of the world, especially coupled with the indications of the seismometer, which is also equipped with the new device.

The seismometer will be placed close to the InSight with a special manipulator, but obviously not too soon for all the preparations to start full-scale observations highlighted a few months.

More than half of the vehicles that were supposed to make a soft landing on Mars, has not coped with its task. Soviet WW2-3 was lost when you run, as well as “Mars-96”, “Mars-4” and “Mars-7” flew past, but most of the machines crashed during landing. “Mars-2”, the American Mars Polar Lander, the European “Beagle 2” and “Schiaparelli”. The Soviet “Mars-3” was able to sit down (world first!) and even to convey a short message, but the connection was broken, so this mission is also in the best case can be written in a “partially successful”.

Failures pursued not only designers of the 1960s and beginning of the XXI century. On-Board computer of the lander “Schiaparelli” incorrectly determined the height, and the module crashed in a collision at a speed of about 300 km/s. the crash site “Schiaparelli” later, managed to find via satellite Mars Reconnaissance Orbiter with a high resolution camera, and the images show the characteristic black spot from the explosion of fuel tanks.

Landing on the red planet still belongs to the category of complex operations with a high degree of risk. But the successful delivery of InSight to work with previously developed solutions is encouraging: perhaps the engineers still managed to turn the tide in their favor.