SIMFEROPOL, November 26 — RIA Novosti. The Deputy of the state Duma of the Russian Federation Natalia Poklonskaya after the provocations of the Ukrainian military ships in the Black sea called the President of Petro Poroshenko “cherubikon” in a complex geopolitical machine that continues to embarrass the country. 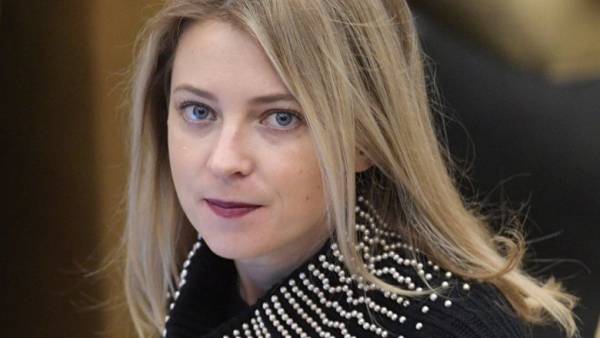 The FSB has previously stated that the ships of naval forces of Ukraine “Berdyansk”, “Nikopol” and “Yana Kapu” violated the Russian border, did not respond to the legitimate demands of accompanying ships and boats of the border service of the FSB and Russia’s black sea fleet to stop immediately and dangerously maneuvered. They had been detained.

On the background of the incident with violation of Russian border by Ukrainian ships, the national security Council and defense (NSDC) of Ukraine — a month before the beginning of campaign for elections of the President of Ukraine took the decision to impose martial law in the country for 60 days. The decision must be approved by Parliament, which will convene for an extraordinary meeting to consider this matter on Monday at 17.00 GMT. Poroshenko said that the introduction of martial law in the country does not mean an immediate mobilization will include the preparation of reservists of the first stage.

“Poroshenko is in a difficult geopolitical xurupita machine, which regularly continues to perform the allotted function is to make shameful the mere mention of Ukraine. Yesterday a desperate provocation in the Black sea with the fleeing of fear and misunderstanding suddenly seeing Ukrainian sailors, the tightening of attacks on the civilian population of Donbass, fussy and predictable imposition of martial law in Ukraine, Ukrainian endless clowns and jesters, disgracing their country in a political talk show on Russian channels… as a result, when the mention of the word “Ukraine” today, people have a fountain of emotions: shame, shame, ridicule, anger, aggression, resentment… ” — Poklonskaya wrote on his page in Facebook.