The Russian President admired the latest developments of Russian scientists in the field of defense. 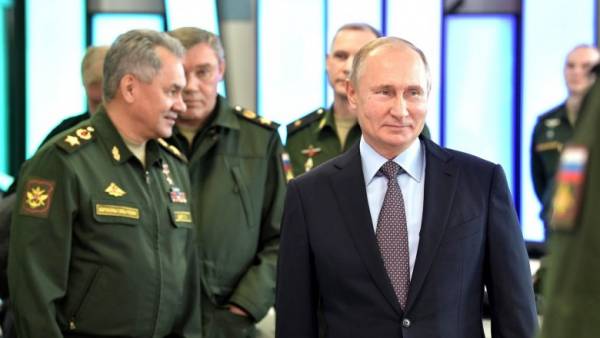 The President of Russia Vladimir Putin visited the new science centre (Technopolis) “Era” in Anapa. The President showed the latest Russian scientific achievements, for example, part of a special saperskoy uniforms — armored boots that protect military personnel in demining operations. During the visit to the scientific center, Putin also participated in a small linguistic debate about the validity of the stress in the word “support”.

After the demonstration Shoigu, Putin patted him on the shoulder with the words: “I told you so.” pic.twitter.com/XKVmnEgtY8

Putin in Technopolis “Era” saw the electronic version of the famous words of Vladimir Dahl. Cadet, representing the know-how to the head of state made a mistake in the pronunciation of the word “ensuring” with the accent on the penultimate syllable, reports TASS. Putin amended the future officers: “Dahl written—”. The Twitter account “the Kremlin pool, RIA” says that Putin and defense Minister Sergei Shoigu took part in the “linguistic argument”, which touched on this word. After the discussion, the defence Minister patted on the shoulder of Putin with the words: “I told you so.”

Well, what other platform will be able to withstand 110 grams of TNT? Only such innovation. The girls, of course, useless, but the engineers quite useful. pic.twitter.com/HTjKanaBGm

Modern saperskoy shoes that show the President in the center “Era”, are an armored platform that takes care of most of the energy from the explosion. Such footwear should save the limbs and life of the Russian sappers working on the clearance of ammunition and bombs.

The Russian leader was pleased with what he saw in Technopolis “Era”.

In full this center will earn at the end of next year. But from what I’ve seen, it certainly can not please.Mr Putinprime Russia (quoted by “RIA Novosti”)

The President also urged the military and scientists to cooperate more closely. According to him, the center “Era” can be a good venue for use of military technology in the civilian sector.

Putin has signed the decree about creation in Anapa Technopolis “Era” 25 Jun 2018. The first stage of construction of the complex lasted for 155 days. A completely new center becomes operational in 2019. The main objectives of the centre “Era”: the development and implementation of new technologies in the field of defence, cooperation of science and production, implementation of programs for young scientists in the army (youth participation in so-called research companies).

In the center of the “Era” work as a major Russian defense companies, such as “Kalashnikov” or “Dry” and small company”startapp”.