Blow it up if you can

How are paving the road in the Caucasian highlands, and why for the locals they are “like air and water.” 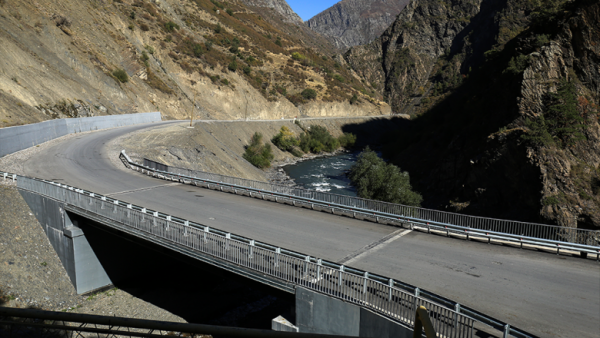 A second before the explosion if nature stops: the wind stops blowing and the birds fall silent. Great rumble, rumble and the mountains tremble. One of the rocks starts to settle. The slope, touching each other, sliding the tall pines. Soaring into the air, the soil raises the clubs of brown-gray dust. After a few moments, the murky cloud covered the sky.

Up the treacherous road

“Today, the road through Agvali — Shauri — Kidero will be closed in connection with the explosion of the road. Please take this warning into account when planning trips to the area” — such messages every few weeks appear on the official website of the administration of high-mountainous Tsuntinsky district of Dagestan.

Tsuntinsky district, bordering with Georgia is the most distant from Makhachkala and most difficult to.

The distance from the capital to the regional center, the villages Cunt 250 kilometers. But to go at least seven hours. And even more: the quality of roads often leaves much to be desired.

Winter in the area are cut off from the “mainland” at least three dozen villages, according to the local administration. However, there is a road through the Bezhta and Antsukh, but it is usually impassable in the winter due to difficult for motorists Henoxstore pass, whose height is more than 2.5 kilometers above sea level. If you make a detour, the path is lengthened by two hours.

To reconstruct the road of Republican significance on the route Agvali — Shauri — Kidero began in 2014. Improve not all the way is 76 miles away, and only the most sophisticated of its plot: 35 to 47 km. The road surface here did not meet even the very last category, quality of roads — fifth. This segment is located between two mountainous areas: Tsuntinsky and Tsumadinsky. The road, mostly running alongside the river are dangerous, especially in winter. On individual sections of the route sunlight in the cold season does not get at all — so the high mountains here. In places the snow and ice stored for several months.

Two years ago here fell into the river military “Ural” — shows our guide Mohammed. — See the wheel is still visible even it was not able to pull it off.

In the river at the bottom of the gorge with a depth of about 80 meters you can really see the wheels. Two soldiers were killed, one of their bodies not found until now. In June of 2014 in these parts during the rockfall fell into the abyss of a van. Nine people were killed and another ten were injured. These tragedies happen often here.

Our “field” jumps up on a narrow dirt road. Ahead heard the distant rumble — drillers using special make holes in the rocks under the tab of a shell for a new explosion. Stop to make photos. On top of the mountain suddenly slipping a few small stones.

It is normal, — the driver grins, seeing our scared faces.

Some more turns and we’re there. Five or six cars and several dozen people standing in the place of congestion. Yesterday blew up the mountain and clear the road so far. Excavator bucket is gaining ground and discharged into the river. According to the forecasts of the workers, the road will open for the passage of a few hours. A little further, someone has already lit a fire to warm tea.

— We didn’t know that the road is closed — says the man of years of fifty. — But the takeaway is, of course, as without it. A farm feed may. When full — we do not forget the food, when dressed — the burqa do not forget — he recalls the proverb.