Volodin told the “Газете.Ru” where his mother money for an apartment

Vyacheslav Volodin told “Газете.Ru” where his mother Lydia Barabanova had the money to buy an apartment in a luxury residential complex with an area of 400 square meters. According to the politician, his mother bought a house with his own funds, received from the sale of the shares. Volodin Barabanova owned shares of the holding “Solar products” in 2007, they sold the shares for substantial amounts. 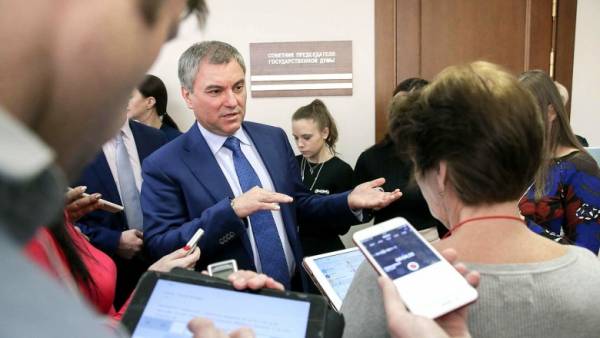 Vyacheslav Volodin confirmed “Газете.Ru” that Lydia Barabanova involved in the investigation of Alexei Navalny, is his mother. The politician also told where she got the funds to buy an apartment in Michurinsky Avenue area of about 400 square meters in a luxury residential complex “White Swan”.

According to Volodin, his mother able to buy myself a flat. The politician said that in 1999 he and his mother became owners of shares of companies of the holding “Solar products” (part of a group of companies “the Bouquet”).

Sister, the current speaker of the state Duma Tatyana Lavrin worked for a long time in the holding HR Director. Later close to Volodin the source added that she Lavrin could not own shares of the holding, since this would lead to a conflict of interest.

In 2007, Volodin, determined to pursue a political career, sold all financial assets. At that time he and his mother owned approximately 33% of shares of “Solar products”, said a source from the entourage of the speaker of the state Duma.

“I can’t exactly remember what it was a percentage of shares and the exact amount. But we are talking about approximately 33% of the shares that were sold for more than 500 million rubles,” — said the source “Газеты.Ru”.

Difficult to calculate, he explains the fact that the assessment was made in dollars at the rate of 2007. However, the money Volodin has already received in rubles within two years after the sale of the shares. The proceeds were placed into accounts in Russian banks, and since then the politician receives from interest.