KIEV, April 30. /TASS/. The Ukrainian military operation in Donbass from Monday will be called Operation joint forces (EP) and pass in a new format, and strengthen the role of the Armed forces of Ukraine (AFU). 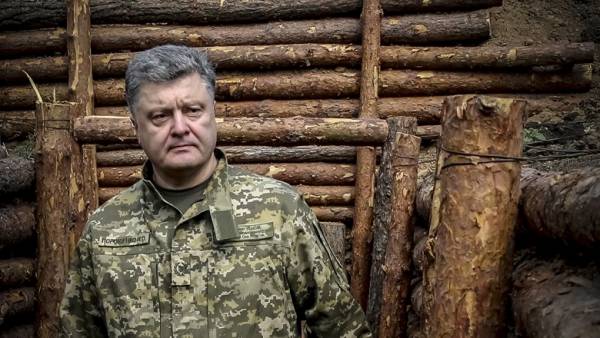 OOS is provided by the so-called law on the reintegration of Donbass and is designed to replace anti-terrorist operation (ATO), which was introduced by the Ukrainian authorities in April 2014.

The President of the new format

The President of Ukraine Petro Poroshenko on the replacement of ATO in the Donbass for the Operation of the joint forces announced on 16 March, Recalling that it is provided by the law “On peculiarities of state policy on ensuring state sovereignty of Ukraine on the temporarily occupied territories in the Donetsk and Lugansk regions” (on the reintegration of Donbass), which was signed in late 2017.

This document uncontrolled Kiev areas are referred to as “temporarily occupied territories”, Russia’s actions qualify as “aggression against Ukraine” and the President shall have the right to use the armed forces in the country without the consent of Parliament, including for the “liberation of the territories in the East of the country.”

This is the joint operations staff of the armed forces for control over all security forces and civil-military administrations in the conflict zone.

Poroshenko explained the need for a new format of “a sharp increase in threats in the East.” According to him, “today, it radically changes the management organization of the military structure, from the APU, there are additional powers to respond to aggression.”

The commander of the OOS head of state appointed Lieutenant General Sergei Nueva. According to the President, he set before him, “the task to strengthen the Armed forces so that they were able to liberate the occupied territories”.

“The key difference is that this is a military operation,” explained New. According to him, the DCS will carry out other military tasks than ATO, particularly with OOS actions APU will have a more global strategy, so the point of confrontation with the enemy will be, rather, a situational phenomenon rather than a trend.

According to the Minister of defence of Ukraine Stepan Poltorak, the first phase of a new environmental protection plan “to stabilize the situation” in the conflict zone, and it will be enough for those forces that already have Kiev in the Donbass.

The Minister stressed that the main task of the security forces is “to liberate the territory from the invaders and defend the territorial integrity of Ukraine”.

As noted by the chief of the General staff of the armed forces Victor Muzhenko, with the beginning of the OOS will significantly expand the capabilities of the APU. The operation involves the centralization of management. “It was an anti-terrorist operation, which de jure took place under the leadership of the ATC — anti-terrorist center of the SBU, and now the operation has gone beyond anti-terrorism framework”, — he explained, adding that now the main military body is the joint operational headquarters, headed by commander of the Combined forces, and through him to implement his decision, he is subject to all law enforcement agencies.

According Muzhenko, it will give the opportunity to focus all resources — economic, military, financial and others — under a single management that “will allow more effectively to restore the” controlled areas, “respectively, to respond to the threats that may occur on the line of contact”.

The General staff argued that centralized management under the leadership of the APU will allow us to more effectively address issues such as rotation of personnel, performing a number of tasks, the restoration of combat.

In the framework of the EP will operate in the region a special procedure where law enforcement agencies will receive new powers. In particular, they will be able to use in case of need the weapon, to detain people and check their documents, to inspect belongings and vehicles, restricting movement on the streets.

However, the representative of the armed forces General staff Yury Bobrov said that the ATO and OOS — “different things and one does not exclude the other.” According to him, “the ATO will continue no matter when the start or end EP, and ATO will end when the last participant of illegal armed formations, the last terrorist will be detained and delivered in law enforcement bodies”.

In turn, the Deputy head of the security Service (SBU) Viktor Kononenko believes that with the new format “did, in fact, has not changed”, only SBU handed over leadership of the military operation.

The new format will directly affect not only the security forces but also ordinary people. So, in settlements located in close proximity to the line of contact will be identified three access levels — green, yellow and red. Level green provides free stay and movement of people on the territory of the settlement, the yellow — only documents, with a possibility of personal inspection of citizens, their belongings and vehicles.

To get into yellow area is now only in the presence of a base in the case of a residence of the citizen or his family member, the availability of real estate, necessary to come to the funeral or to the burial place of loved ones. The red prohibits the movement of citizens without having a permit.