Tinsel and steel. Why him and Merkel went to the US President

Donald trump turned a deaf ear to the arguments of the Chancellor of Germany tariffs, but willingly arranged fireworks and a reception with billionaires in honor of the President of France. 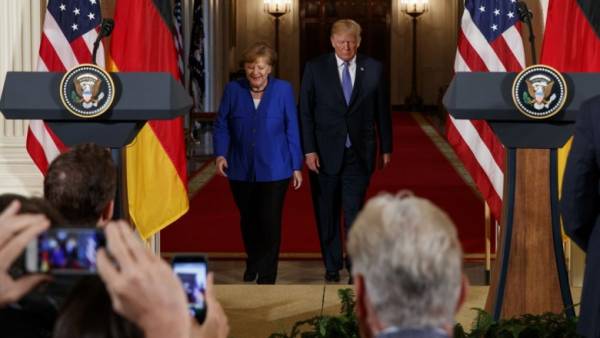 The great French philosopher and sociologist Raymond Aron once observed that Europe is so small and vulnerable that must make many different bets. By that he meant the inability of the European States, even the largest, conduct a completely independent foreign policy.

So it is: after a strategic catastrophe 1914 — 1945 Europe will never be able to regain his former power and influence on world Affairs. Especially now, when the center of the whole world of geopolitics has shifted to Asia, finally sliding the Old world to the periphery. This, however, does not mean that the leading European States could not continue to be subtle and sophisticated diplomacy, often allowing them to achieve more than formally allow their scale on the world political map.

This is especially true of France — the only European country that was able to create and maintain a nuclear Arsenal. But only to a certain limit, and held at this week’s visits in the USA, the heads of France and Germany is once again confirmed.

Emmanuel macron and Angela Merkel each other visited Washington and had discussions with Donald trump. While they pursue although similar, but different by the nature of the target. For Merkel, a few weeks ago for the fourth time German Chancellor after months of painful negotiations, it was important to speak confidently as a representative of the European Union. The main priorities is the exclusion of Europe from a system of duties on steel and aluminium, introduced by trump in March, and the preservation of the States in the so-called “Iranian nuclear deal”. None of the questions Merkel has not received from trump’s encouraging response. That is, returned from America altogether.

Apparent root cause of the difficulties in the transatlantic relationship — a fundamental discrepancy between the behaviours of trump and represents the Europe of Merkel. If the Chancellor of Germany, the most important is to entangle the partner system of mutual obligations, and then methodically push a relatively attractive business conditions for everyone, the trump fundamentally breaks all the systems. For his commitments, once and for all, does not exist in principle, and everything is subject to a one-time deal for a friend in Russia the system of “hitting — back”. And developed over the past years under German influence Europe can not work well even in theory. That is why all the meetings with the trump — and the meeting on Friday, April 27, was no exception — Merkel looks sullen and puzzled.

Emmanuel macron, in turn, pursued in Washington, not so much European, how many national French goal. Elected a year ago, the President of the Fifth Republic is constantly trying to compensate for the economic weakness of France’s foreign policy successes. Since his arrival at the Elysee Palace macron tirelessly working to return France to the status and quality of player at the global level.