On the eve of Vladimir Putin’s inauguration, officials will reduce public activity. 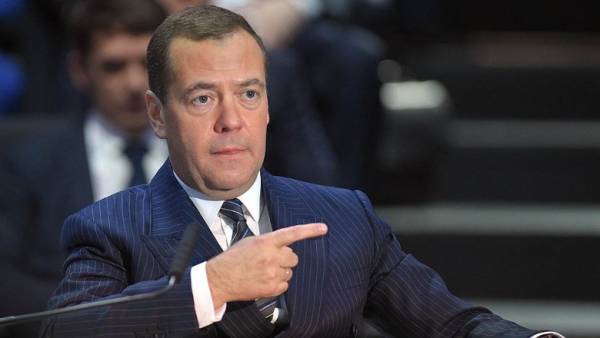 As it became known””, on may 3, Prime Minister Dmitry Medvedev will visit the exhibition center, which will hold a meeting on development of agriculture. For Mr. Medvedev that will be the last public event at the rank of Chairman of the present government, like many other White house staff: according to “Kommersant”, the administration has already recommended that the Federal officials on the eve of inauguration of Vladimir Putin “to reduce media activity”. The political scientist believes that no alternatives to the President on the agenda should not be, otherwise the news of the inauguration “will not look like something meaningful”.

On the forthcoming visit of Dmitry Medvedev at ENEA told “Kommersant” two sources in the government. According to them, immediately after the first may holidays, may 3, the Prime Minister will be visiting the exhibition (including will go to the recently opened “aviation and cosmonautics”), and will also hold a meeting on the development of the agricultural sector. “De facto it will be the last public appearance of Chairman of the government before the inauguration, in the days that followed will be carried out routine work in the office,” says one of the interlocutors “Kommersant”. Officially in the White house, this information does not comment.

Note that last Thursday, Dmitry Medvedev chairs last meeting of the government in the current composition, which discussed the issues of customs regulation and state support of insurance in agriculture. After the meeting, the Prime Minister thanked the subordinates for their work, according to the source “Kommersant” in the White house: Mr. Medvedev organized a reception with champagne and appetizers, and some of the officials handed the highest award of the government — the medal of Stolypina of I degree (is a reward for merits in solving strategic tasks of socio-economic development of Russia). It is possible that the Cabinet of Ministers will gather again on Saturday 5 may to discuss the coordination of actions before the inauguration of the President, however, according to “Kommersant”, the meeting will be closed to the media format.

After 3 may, Federal officials leave the public space.

According to government and Kremlin sources, of the presidential administration, the Cabinet of Ministers and the regional authorities have already received a recommendation “to reduce media activity” not to interrupt “the information agenda of the first person” on the eve of the inauguration. The analyst Abbas Gallyamov called the decision the correct “from a technological point of view”: “there are No alternatives to the President on the agenda should not be, otherwise the news of the inauguration won’t look like something meaningful”.

We will remind that inauguration of Vladimir Putin for a fourth presidential term scheduled for may 7. The next day, the Duma has to approve the candidacy of Prime Minister, which will contribute the President: as previously reported, “b”, with high probability, Dmitry Medvedev will retain his post. After the inauguration of the President and Prime Minister will start consultations on the composition of the government. Kommersant’s source in the Kremlin said that after being elected for a third term, Mr. Putin personally held meetings with each of the potential Ministers or Deputy Prime Ministers, while Mr Medvedev was more concerned with the formation of the structure of the government. Most likely this format will remain and now, says the source “b”, but the Prime Minister will not be ignored: “he’s got to work with these people”. In 2012, the definition of the government structure and personnel selection took two weeks: Putin announced the names of Deputy Prime Ministers and Ministers on 21 may. About the same time will require the procedure and this time, says the employee of the presidential administration.