The Rothschilds have cultivated the new financial tycoon. Soon you will know about it. 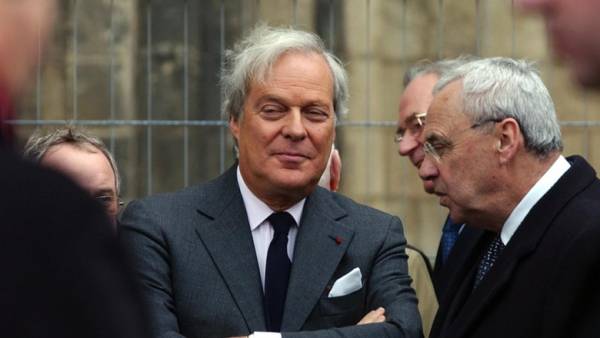 May 17, investment Bank Rothschild & Co will be headed by the representative of the seventh generation of the famous dynasty of the Rothschilds — a 37-year-old Alexander de Rothschild. For two hundred years, the family strictly observed the precepts of the Patriarch and the founder of the clan, which punished the descendants to always act in unison, to entrust the management of a family business only family in the male line and to observe secrecy in business. The famous banking house for centuries engaged in transactions of historic proportions. The image of the Almighty behind the scenes puppeteers was formed under the impression of their activities. Conspiracy theorists believe that the famous family, whose branches, widely spread in Europe and the USA, controls the world’s finances through the Federal reserve system. The origins and the change of generations in the well-known banking clan — in the material “Tape.ru”.

The end of the eighteenth century is the era of huge change in Western Europe: the revolution and the overthrow of the monarchy in France, the birth of an industry, a series of large-scale wars, the gradual loss of the landowners-aristocrats political influence and the emancipation of oppressed groups. It was at this time that the Foundation for financial power of the Rothschilds. The ancestor of the dynasty is considered Mayer Amschel, son of Amschel Moses, the humble money-changers from the Jewish quarter in Frankfurt am main.

Father wanted bright boy to become a Rabbi, but Mayer showed a propensity for worldly matters. For a time he practiced in the banking house of Oppenheimer at Hannover. Then worked in the money-changing shop of his father under a red sign (in German Rot Schild sounds like, later, this phrase became the name).

“Spotting the trends,” Mayer Amschel engaged in buying of ancient coins and medals. German nobility of the time were fond of collecting various Antiques, so polite and neat young man quickly made useful contacts with the powerful, and money-changing shop transformed into a Bank.

Career advancement of the son of the money-changers out of the ghetto occurred after meeting with the Landgrave of Hesse-Kassel Wilhelm. Traditionally, the Jewish bankers engaged in a variety of financial transactions for the German princes. For example, the court bankers of the Habsburgs in Vienna were the members of the Oppenheimers, king of Prussia Frederick II the Great used the services of the Berlin firm “Ephraim and sons.” Beating the competition through patronage and gifts to the patrons of Mayer Amschel became the main financier of the court of William.

Everything in the house

The welfare of the family abruptly went up the hill, the younger kids are actively involved in the family business. Like fairy-tale characters, methane boom in search of happiness, sons Mayer left for the largest cities of Europe, Solomon in Vienna, Nathan in Manchester (he later moved to London), Kalman in Naples, James at Paris. The eldest son, stayed in Frankfurt.

To commemorate this the emblem depicts five Rothschild arrows and the motto in Latin: Concordia, Integritas, Industria — the Consent, Honesty, Diligence.

Thus was founded the international financial network, covering the most developed European countries. Formally competing, the brothers supported each other and exchanged news with the help of coded in Yiddish correspondence. Subsequently, the most viable branches of the family tree were English (from Nathan) and French (from Jacob) — they are thriving so far.

To the marriage of children courtier financier approached very seriously: the sons brought into the family of daughters with a substantial dowry, the couple’s daughters was also part of the clan, but worked on the lower positions. To stand at the helm of the family business the sons-in-law is not shining in any way. The wealth of the clan was able to control only a descendant of Mayer Amschel in the male line. Acquired money had to stay in the family, so the descendants of Mayer was married to a cousin and three times removed relatives.

However, so did the elite. For example, the end of XIX century the Austrian Imperial family was so extensive that more and more frequent were marriages between relatives belonging to different branches of the Habsburg dynasty, written by Andrei Shary and Yaroslav Shimov in his book, “Austria-Hungary: the fate of the Empire.” The Archduke of Austria-Hungary Franz Ferdinand, became in 1895 the heir to the throne, was indignant about this:

If someone from our family will love on the side, in the pedigree certainly there is some nonsense that hinder this marriage. It turns out that we are husband and wife, all twenty relatives. In the end, the half — fools or complete idiots.

The Rothschilds intermarried exclusively with Judaism and gained notoriety as the “Jewish Royal family”. The rules, established by Mayer Amschel, remained unchanged for 200 years, only in the 1970-ies David Rene, the representative of the French branch of the Rothschilds, he married a Catholic, Italian aristocrat Olympia Aldobrandini.

Their daughters they brought up in the Catholic faith, but his only son Alexander — the future heir to the family business — in Judaism.

Also in 2010, Rothschild was first appointed Executive Director of investment Bank NM Rothschild man is not from Rodney Briton Nigel Higgins. However, quite a stranger Higgins still was not — by this time, he worked for a family for a quarter century.

The Rothschilds could never be at the level of small-town rich, if not the war. In 1806 the French Emperor Napoleon I invaded Germany. The Landgrave William fled the country, leaving things to the care of his court banker. Then, and useful, but his arrow shot in the direction of Albion. Son Nathan instantly threw the textiles trade in Manchester and retrained in the stock market tycoon in London.

The French confiscated the gold of Wilhelm, but the main capital of his boss Rothschild-senior due to operations with securities Nathan managed to make to England. To celebrate, the Landgrave wrote to the court bankers for a nominal Commission, all rights to manage its securities, and Nathan engaged in buying and selling British government bonds. So the Rothschilds were the first European millionaires, and funded the wars of great Britain against Napoleon. One of their bright operations to deliver gold to Wellington’s army in Spain.

19 Sep 1812 exhausted fighting the Russian army under the command of field Marshal Prince Golenishchev-Kutuzov retreated to Podolsk. On the same day in the house on the Jewish street of Frankfurt am main in the seventieth year of life has died the founder of the house of Rothschild, Mayer Amschel, but his cause lived and grew — the wealth and influence of the Rothschild brothers has increased with the amounts of issued loans.

There is a legend that Nathan learned of the victory over Napoleon at Waterloo a day before everyone in London, but on the exchange it came with a sad face and began to sell government bonds. Seeing this, the speculators decided that the British and their allies broken, rushed to dispose of securities at a discount.

Waiting for the collapse, the cunning agents of Nathan bought the cheapened bonds. The result is the London Rothschild earned on this transaction of £ 40 million.

However, some researchers deny this story, the veracity of Nathan bought securities on the background of defeatism before the battle of Waterloo, they say.

The world, established in Europe after the Napoleonic wars also contributed to the growth of the welfare of the families of the war-ravaged countries needed the loans for recovery. The grateful monarch winners [brotherhood of bankers nobility, and the Austrian Emperor Franz II granted the title of Baron Rothschild. Napoleon tried to conquer Europe with rifles and cannons, but lost. The old world obeyed the bills and loans of the banking family.