The natives of Papua New Guinea to the early twentieth century did the daggers of the human femur for prestige, and for utilitarian purposes used daggers carved from the bones of cassowary. 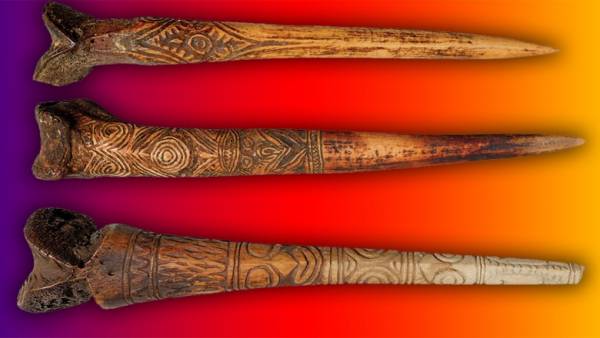 To such conclusion came from American anthropologists and physicists, who have measured the strength of both arms, and described the results in an article published in Royal Society Open Science.

Until the beginning of XX century, the inhabitants of New Guinea as a weapon used bone daggers. They killed the enemy or were wounded with a punch to the throat. The dagger could pierce the knee, hip or ankle of a prisoner. After that he remained alive, but could not escape and subsequently became lunch.

Daggers were not only weapons, but also a symbol of prestige. They were made of human femurs, and valued the bones of their fallen enemies, or from tibiotarsus of cassowary (the bone that connects the femur and the Tarsus). Cassowaries vicious and pugnacious birds, and some lucky hunters thus affirm their masculinity. Some od the dead lists the number of slain cassowaries. Probably, Papuans used the bones of cassowaries, and for utilitarian reasons. They had excellent mechanical strength and was resistant to bending and twisting.

However, comparable if daggers made of human bone and kazarovich strength, or the daggers of human bones were used more for prestige, was unknown.

To find out, American scientists under the leadership of Nathaniel Domini (Nathaniel Dominy) from Dartmouth College conducted a stress test of a dagger of cassowary bone made in the 1970-ies. Then they did a CT scan 11 daggers, stored in the collection of the Museum of art at Dartmouth College. Five of them were made of human bones, six bones of the cassowary. On the obtained three-dimensional models, scientists conducted a virtual stress tests.

With the help of computer imaging, they estimated the density of the material and the geometry of the blade, and using a uniaxial mechanical tester and computer simulation checked, what force is needed to fracture daggers.

The results of the tests scientists came to the conclusion that he and the other material are of approximately the same mechanical properties, but the daggers made from human bones, proved to be more resistant to bending. To break them, virtual had to apply a force 30 percent higher. At the same time, the researchers note that the blades of the bones of a cassowary were deliberately made more fragile. In the manufacture of them cut off a thicker layer of bone, so they were more flat compared to the daggers of human bones and make it easier to carry during battle. If “Kasparova” blades broke, they were easier to replace. Therefore, the authors of the study came to the conclusion that the daggers of human bones was more durable and wore it for prestige, to emphasize their status.