Massacre at mount Carmel. As the FBI struggle with the sect turned into a nightmare

April 19, 1993 ended in a confrontation between FBI agents and members of the sect “Branch of David.” 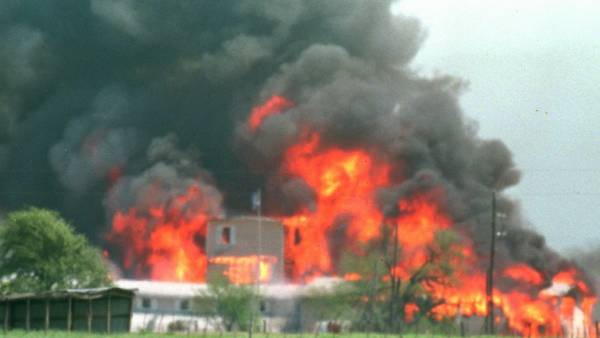 In the spring of 1993 the name of Waco and David Koresh became known to all the world. Nearly two months, the leader of the sect with his flock was under siege by American forces. The denouement of this drama, and to this day is considered one of the biggest failures of the Federal service of investigation of the United States.

Nowhere so widely spread fashion the new religious movements in America. Since the nineteenth century in the New world of enterprising people declared themselves “Messiahs” and, in its own interpreting the Bible, collected hundreds and thousands of followers, eager to rescue.

In the 1930-ies the Church of seventh day Adventists, originated in the first half of the nineteenth century, survived the split, which was separated from it, the Davidian sect of seventh-day Adventists. After the death of the latter-day “prophet” Davidian Victor Hateva (of Bulgarian origin) among his followers there was another division, in which the preacher Ben Roden has created a religious organization “the Branch of David.”

The center of the habitat of the followers of this religious movement became ranch “mount Carmel” located in Texas, a half dozen kilometers from the city of Waco.

After the death of Rodin, the leadership of the sect passed to his widow Louisa. The woman herself was not young and was looking for a successor. The main Challenger was her son George, but his mother considered him charismatic enough for this role.

In 1981, a member of the sect was a 21-year-old Vernon Howell. Mother gave birth to him at age 15 and didn’t care much about his offspring. In childhood he suffered all possible indignities, including gang rape by classmates. The only thing that succeeded Vernon in Bible study. His arguments about God have enchanted audiences and Louise Roden felt that he can become the new leader.

There was another reason — Howell became the lover of the older Louise.

George Roden to put up with the competitor didn’t lead to another split — about 25 members of the sect, together with Howell left the “mount Carmel”.

But in 1987, after the death of Louise Roden, the rivals met again in the struggle for “mount Carmel”, referring complaints to each other to the police and trying to solve issues with weapons. Everything was over the fact that one of the supporters of Rodin said their leader, that is the Messiah, and enraged George hacked it with an axe. The court recognized Rodin’s insane, sending him for compulsory treatment. The ranch was put up for sale and the supporters of Howell bought him out. After that he became the sole and undisputed leader of the “Branch of David”.

Vernon changed his name to David Koresh (in honor of king David and king Cyrus the Persian, which in Hebrew pronounced as “PAL”) and preached the inevitability Armageddons battle that happens before the second coming.

Members of the sect unconditionally obey the man, confident that he is the owner of the higher knowledge and the bearer of the word of God. When the cult’s leader announced that he had a vision that directs women to engage in sexual relations only with him, all couples “Branch of David” meekly terminated the marriage.

The zealots were convinced that all persecution of the Bud by the authorities serve as a confirmation of his words about the inevitable battle before the end of the world. Members of the sect had a stockpile of weapons and was ready to fight back the “forces of darkness”.

One of the sources of income of the zealots who led a very temperate life, was the resale of weapons. It should be noted that members of the “Branch of David” conducted these operations are perfectly legal. But the security forces received information that cultists alter semi-automatic weapons to automatic. But this is was a gross violation of the law.

In 1992 in relation to “Branch of David” was initiated and investigated by the Office for control over turnover of alcohol, tobacco and firearms (ATF). In addition, according to operational information, man cohabited with girls aged 10 to 14 years, and there were cases of rape.

The evidence, however, practically was not. To gather additional information in January 1993 in a house located near a ranch settled eight operatives, who posed as students.

It was first a blunder of the intelligence services — because of ill-conceived operation. Buddy took one look at the neighbors to understand everything. To his followers he said: these people long out of College age, besides, they drive on machines that will not be able to afford any one student.